My first full day in Athens was to be interrupted mid day with a change of accommodation, so I decided to leave the Acropolis until the next day and do as many of the other main sites as I could.

First stop was a quick look at the Metropolitan Cathedral of Athens which was very close to my hotel. 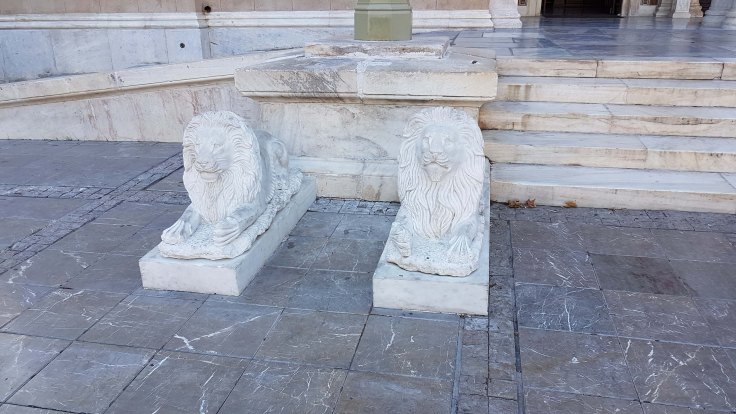 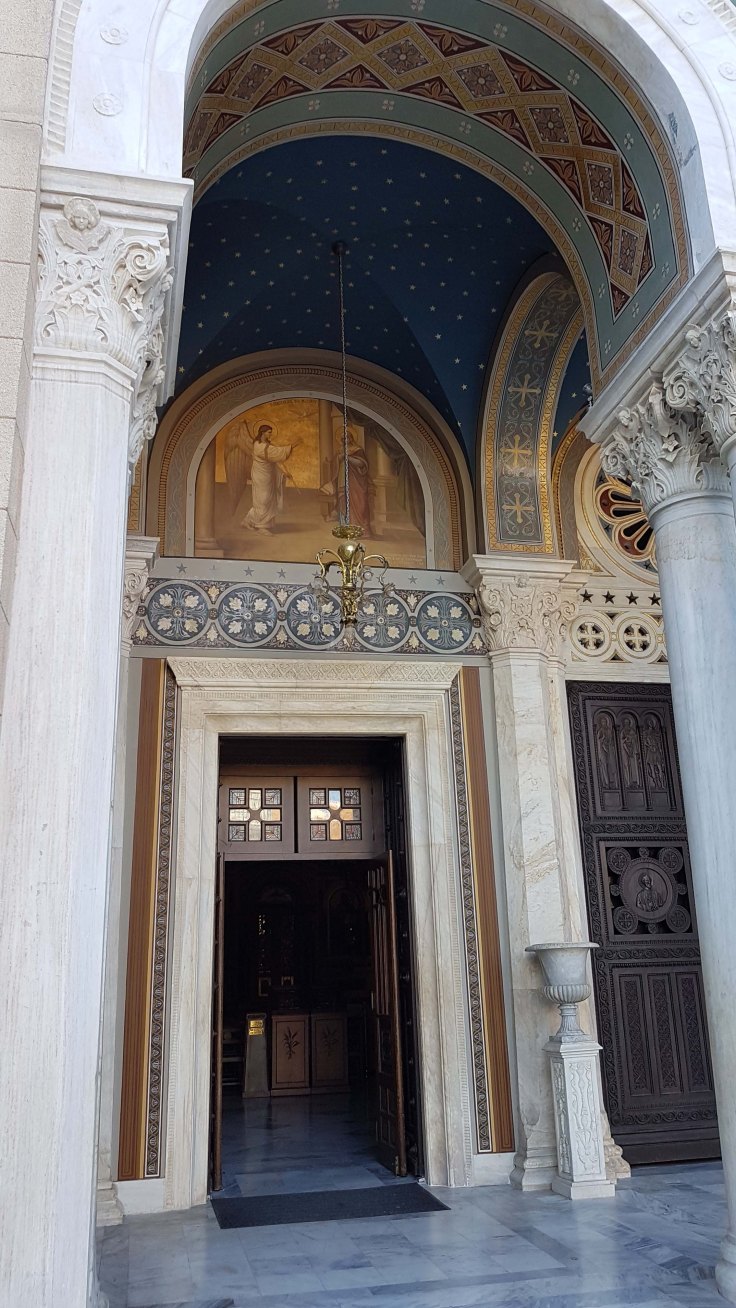 Next was my first major site, the Ancient Agora. It sits at the foot of the Acropolis and was once the centre of social and political activity. The site has a rebuilt Stoa of Attalos, which houses a small museum. I used the Rick Steves app to guide me through this site and found it really helpful. And kicked myself for forgetting to use it at the National Archaeological Museum the day before. 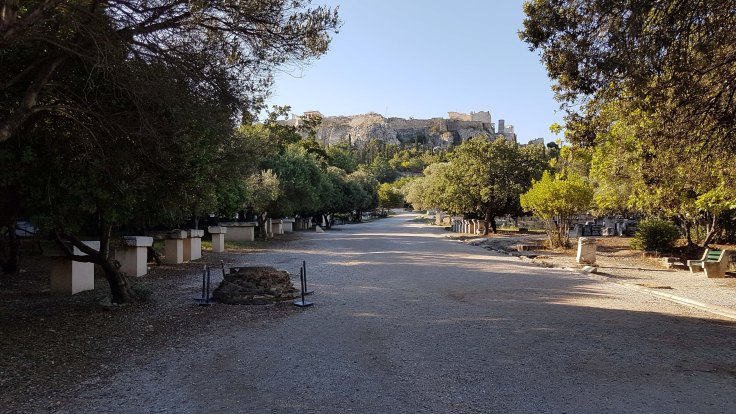 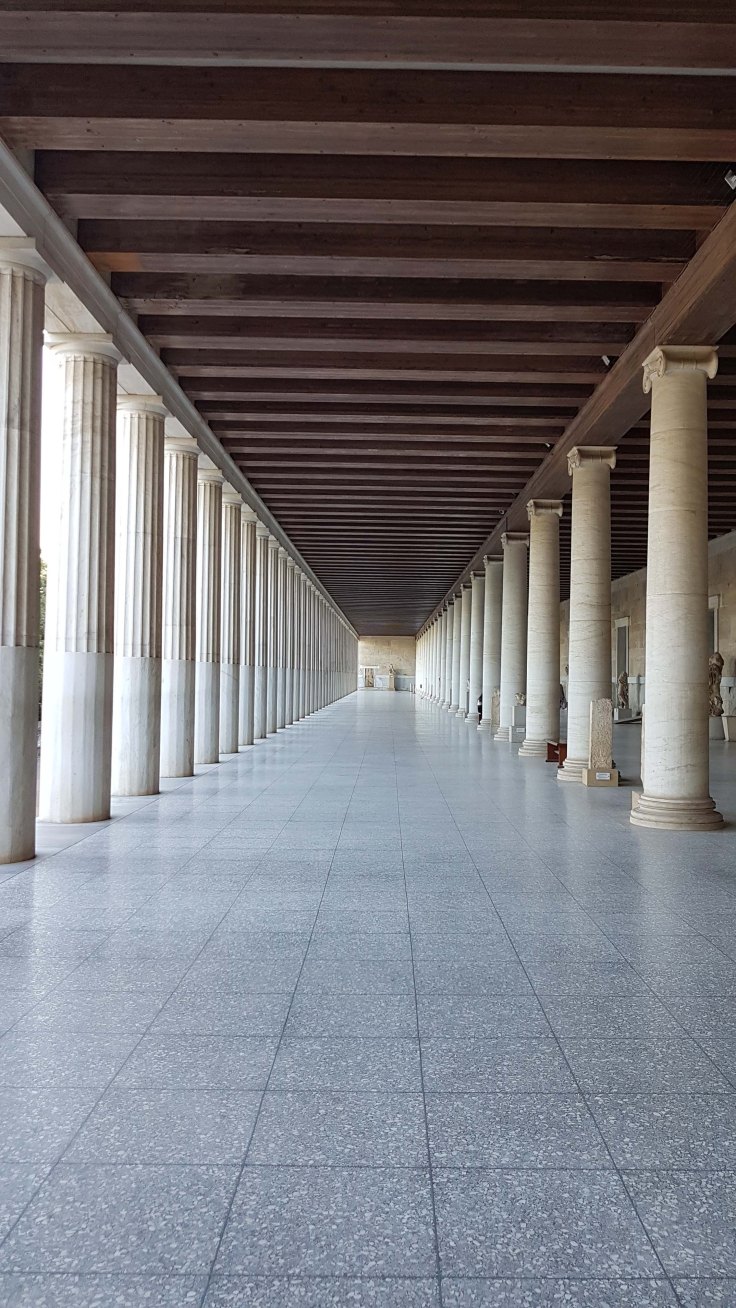 The excavated part of the Agora contains extensive ruins of a once busy town centre. It is spectacularly overlooked by both the Acropolis and the Temple of Hephaestus.

The Temple of Hephaestus can be accessed from the Ancient Agora site, included in the ticket. I should say that there is a combined ticket available covering several of the ancient sites in Athens and is well worth purchasing if you are visiting a few. Starting at the Ancient Agora is a good idea to avoid the queues for tickets at the Acropolis ticket booth too. Last tip on tickets is that they are half price for students of overseas universities, so if you are one, take your student card with you. That applies to many of the sites all over Greece.

The temple is well preserved and quite an imposing site. 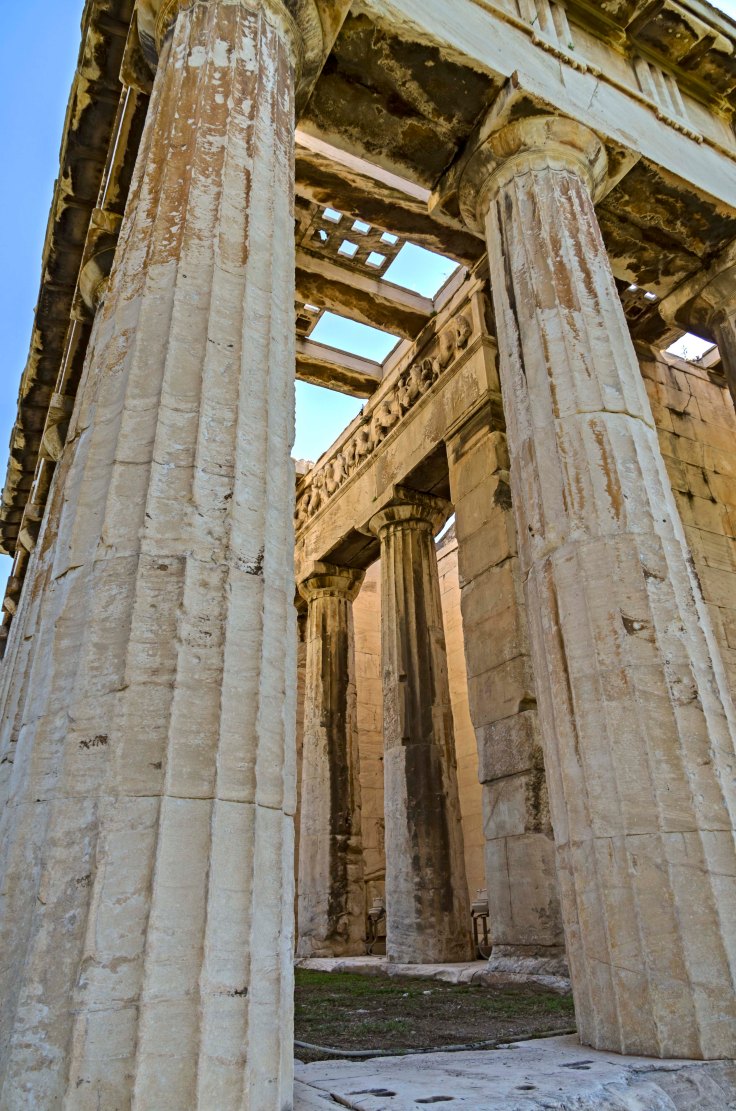 Near the exit of the Agora is a lovely little church, the Church of the Holy Apostles. one of the oldest Byzantine churches in Athens. Remarkably preserved. 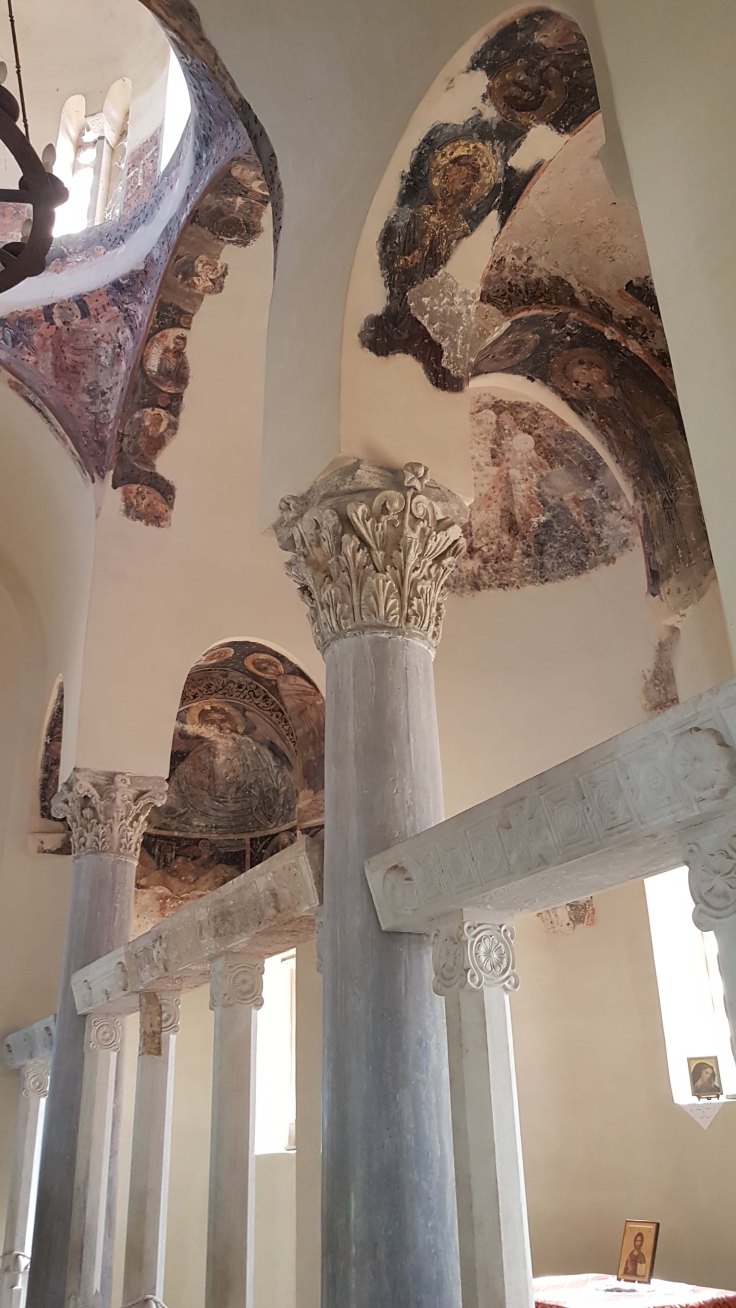 Not far from the Ancient Agora is the Roman Agora, which was the centre of civil activity in Roman times. It has the Gate of Athena Archegetis at one end and Tower of the Winds at the other. The area is smaller than the Ancient Agora and takes less time to visit. 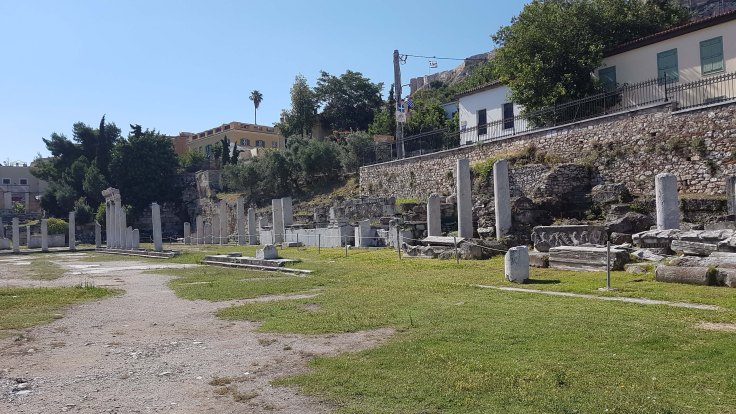 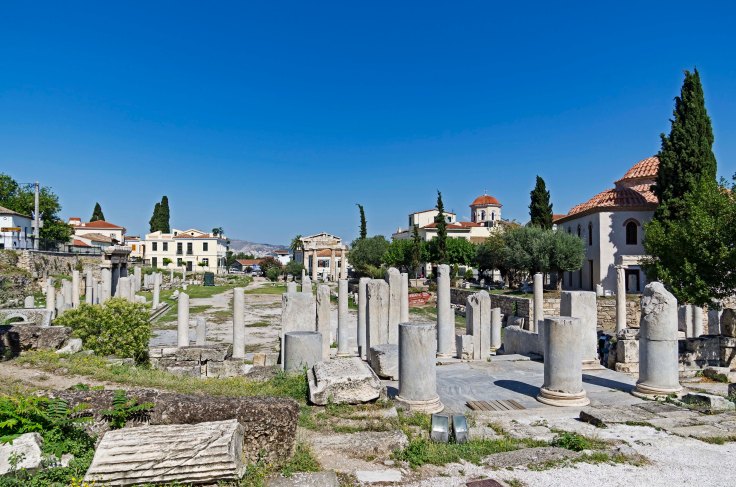 From the Roman Agora it is another short walk to Hadrian’s Library. It was a centre of learning in Roman times. Another smallish site that doesn’t take too long to visit. 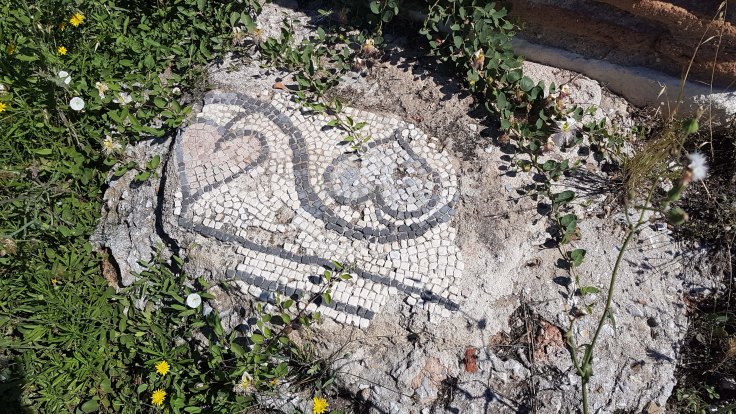 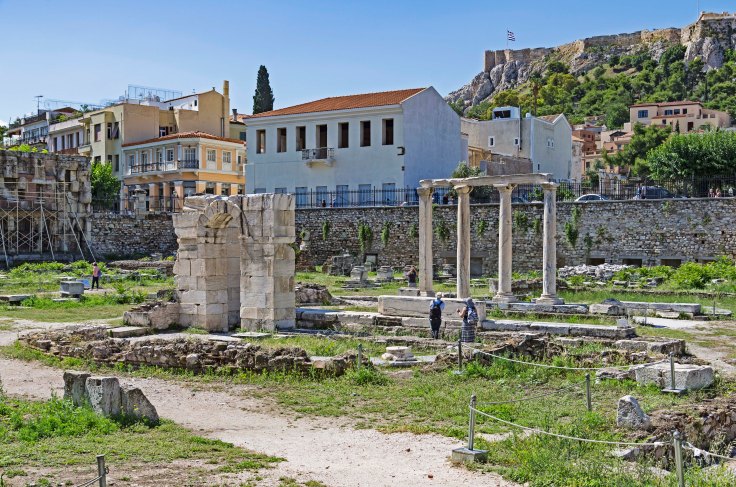 On my way back to my hotel to move to my new accommodation I had a better look inside the Cathedral. It was quite beautiful. 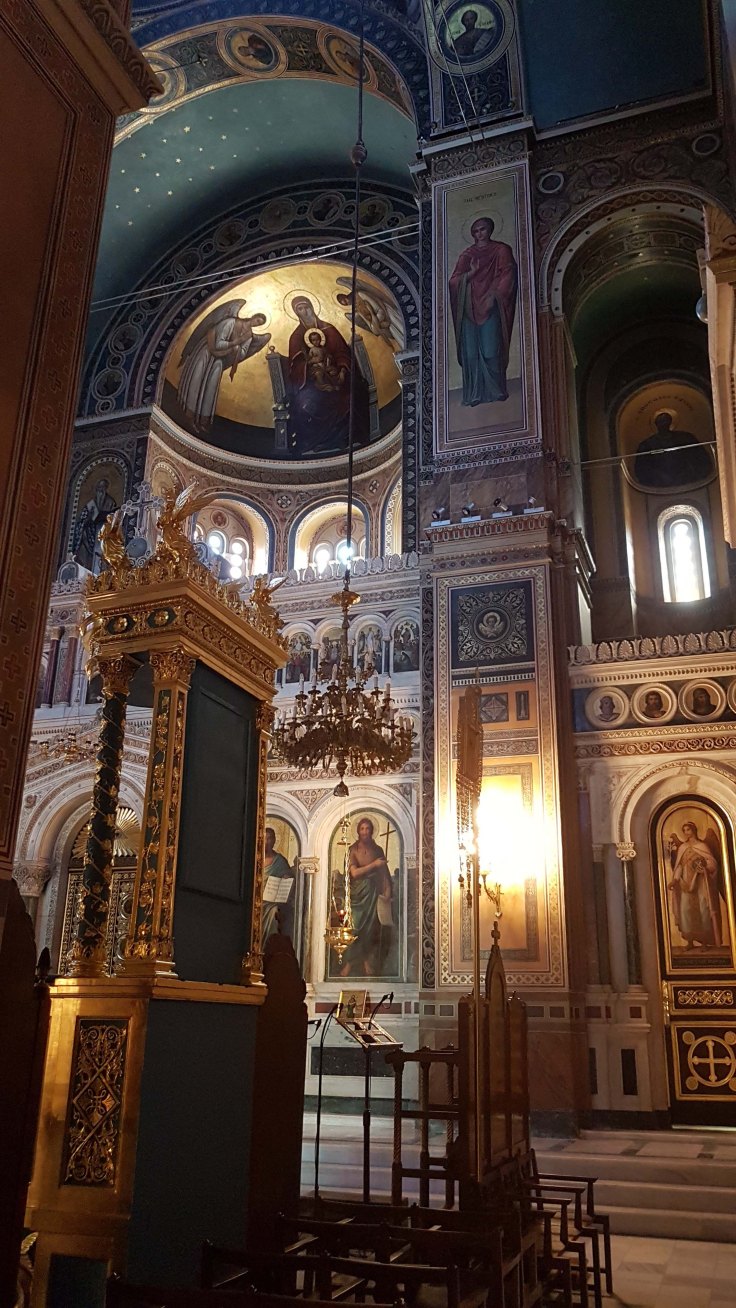 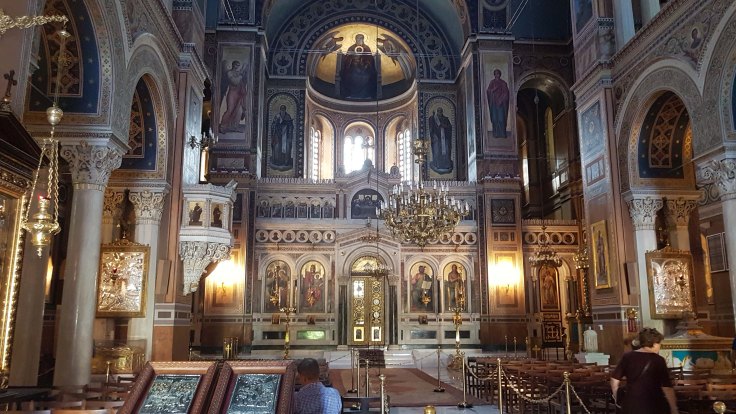 All of this accomplished by noon, I moved into my apartment for my final three nights in Greece. It was a beautiful, spacious, well lit and well equipped apartment in a great location in Plaka. 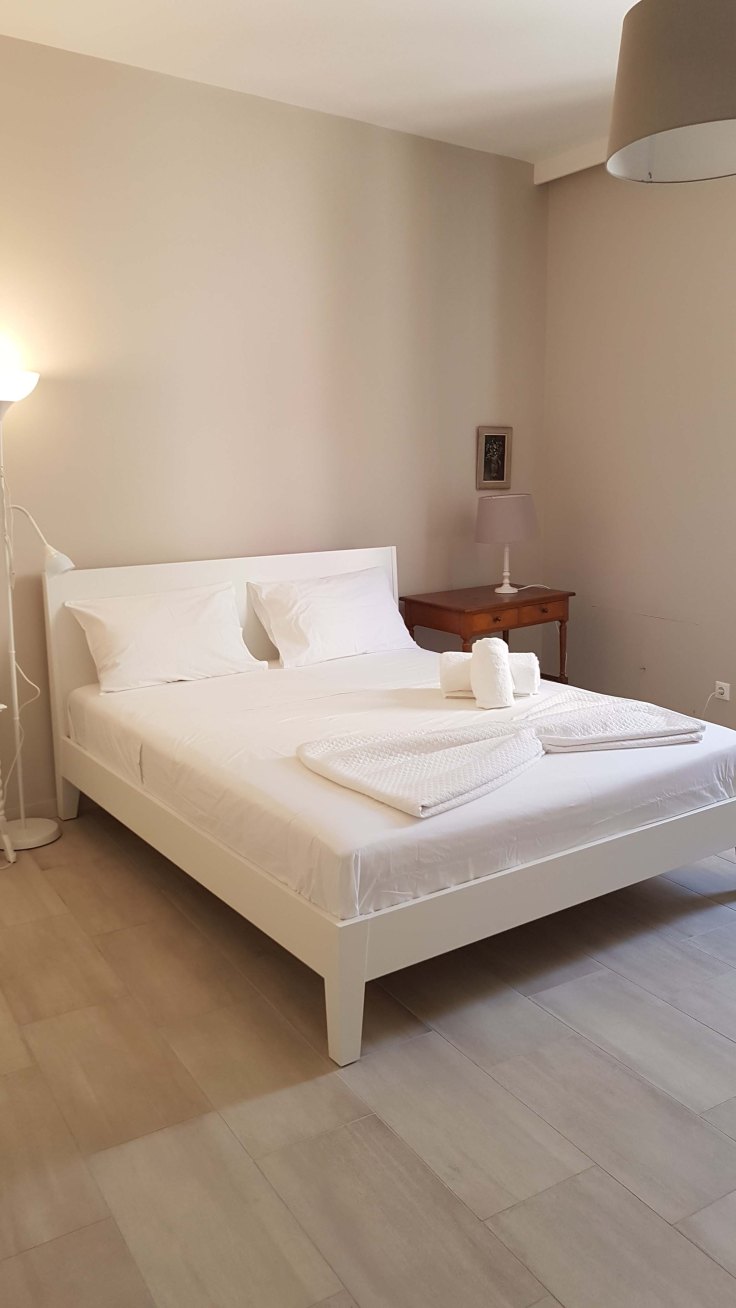 My new apartment was just a short walk from my next destination, Hadrian’s Arch. It is a rather imposing arch that overlooks a busy city street. Old meets new.

From there it was a short walk to the Temple of Olympian Zeus. A truly magnificent site with towering columns, under the watchful gaze of the Acropolis. 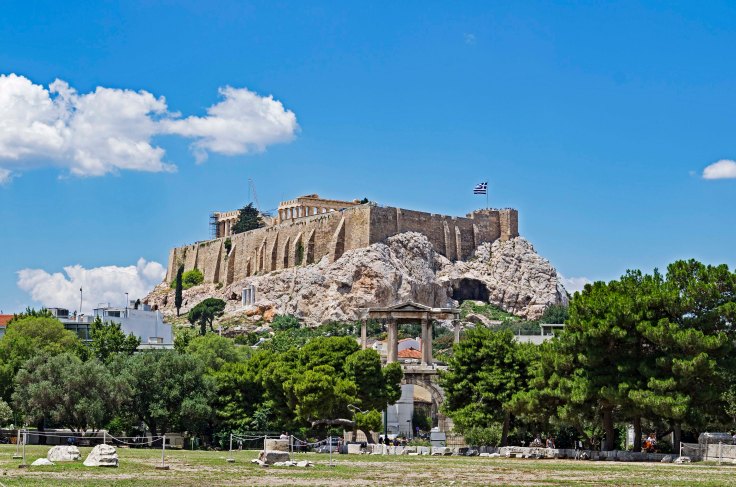 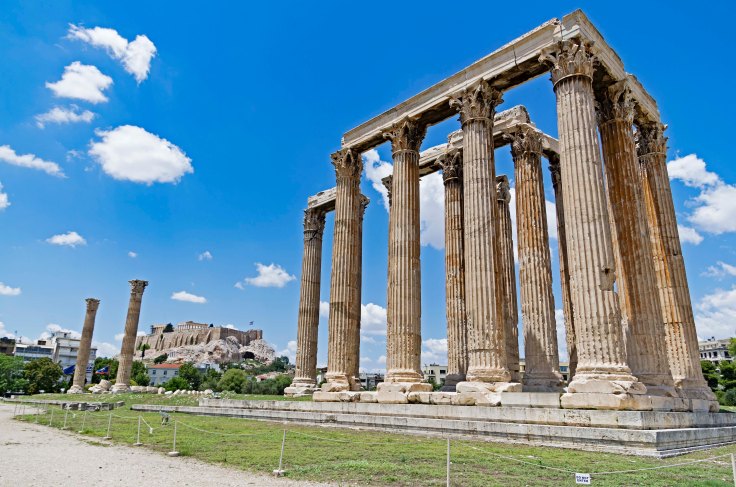 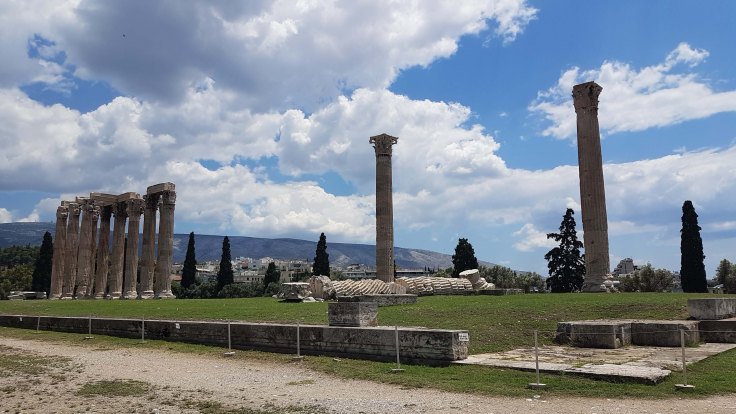 Another short walk away is the Panathenaic Stadium, the home of the modern Olympic Games. Made entirely of marble it is still used regularly and on the day I was there packing up was happening after a concert the night before. 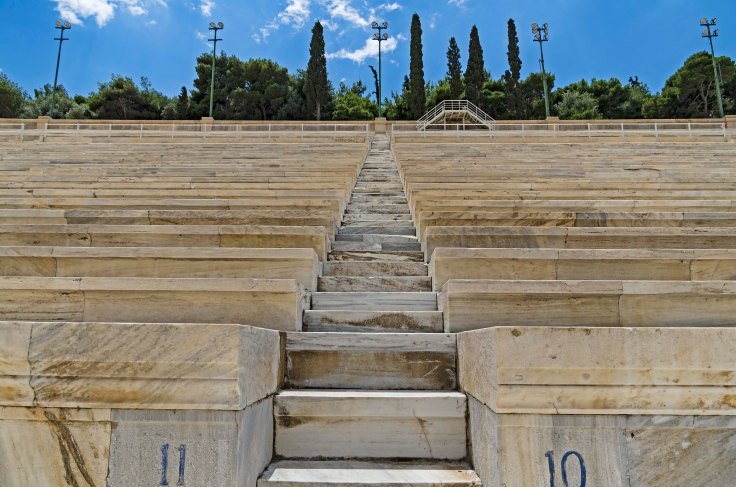 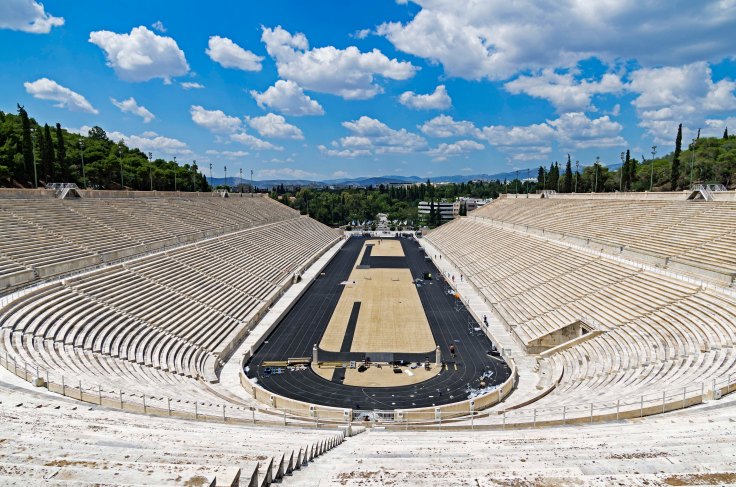 From there it was a simple stroll through the National Gardens to Syntagma Square to watch the changing of the guard, which happens every 60 minutes. 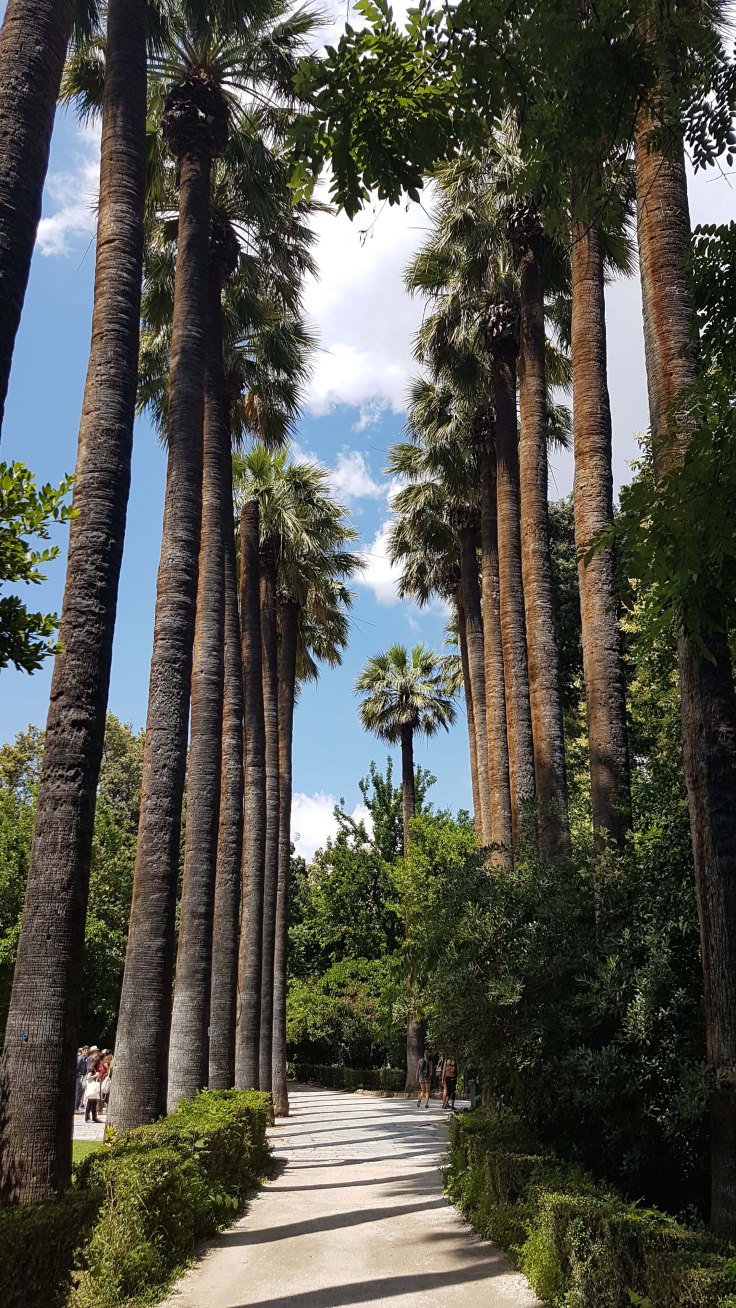 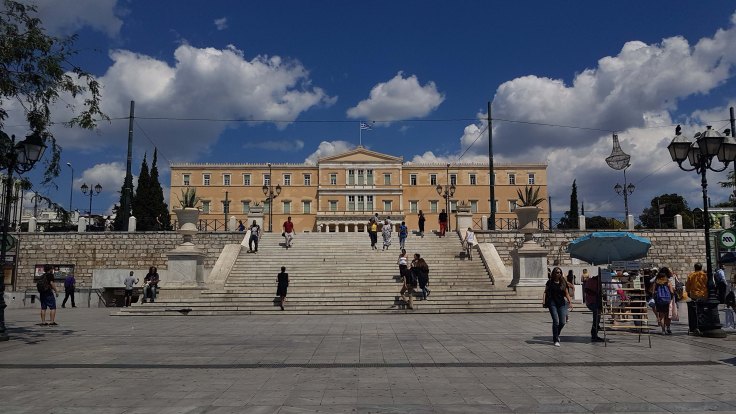 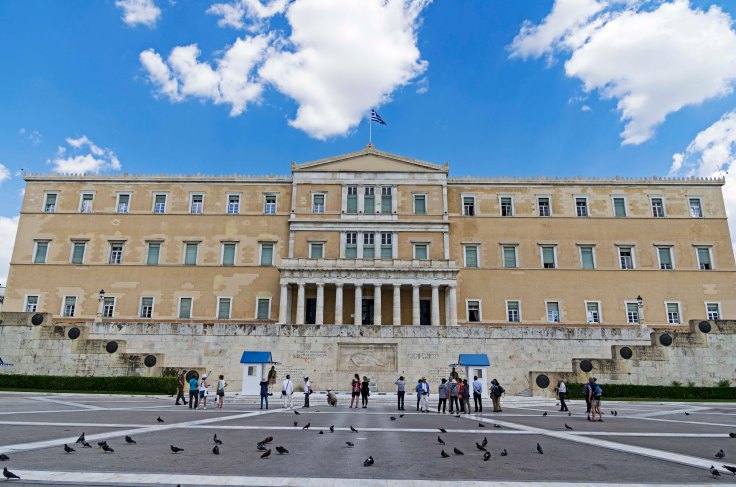 I probably should have stopped at this point, my legs had already had a big day but I decided I had one more site in me, and it was still only late afternoon. I walked from Syntagma, down past Monastiraki to Kerameikos, an ancient city and cemetery. It is an extensive site and you could spend hours there. It is also still being actively excavated. It seemed so Greek to me that there was a corner of the site bordered by a house and its back garden. Athens really is a living ancient city. 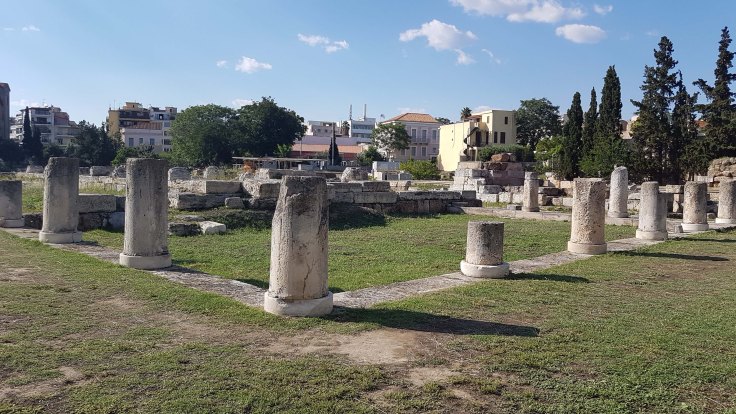 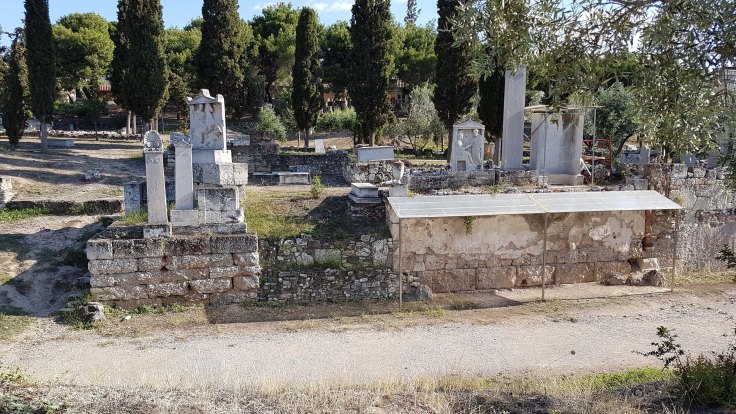 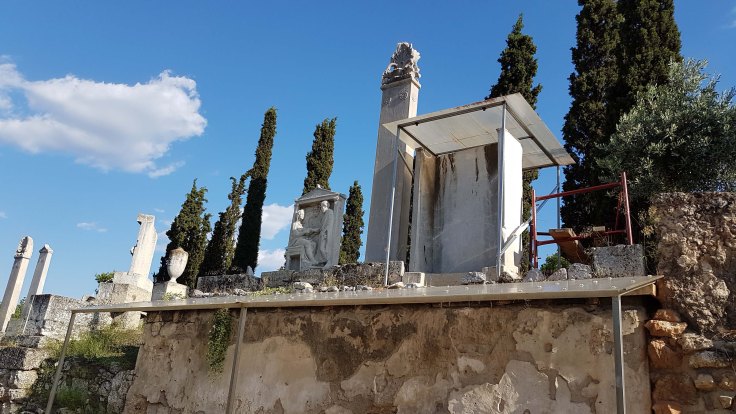 Kerameikos also has a museum which highlights the history of burials in ancient Athens. It interested me to read that there came a time when the elaborate nature of burial sculpture was ordered to be toned down due to the cost. I figured it was austerity Ancient Greek style. History truly repeats.

Kerameikos is a site that would be lauded anywhere else in the world, but competing with the other ancient sites in Athens it gets many fewer tourists. Well worth a visit though.

From there I walked back around the Acropolis. It was early evening, street sellers had their stalls set up, early diners were seated at restaurants and it was just a lovely summer evening in Athens. 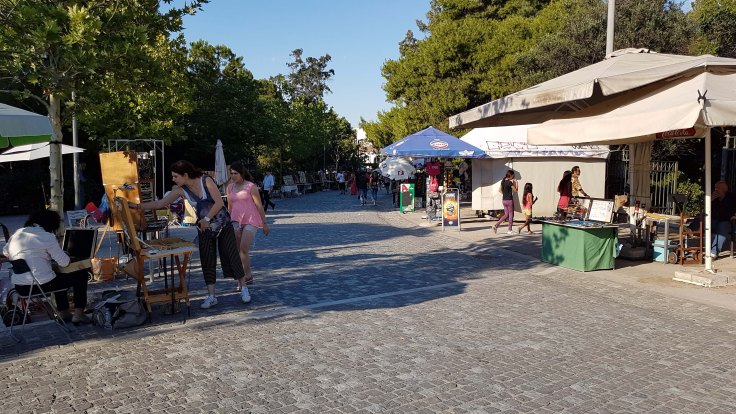 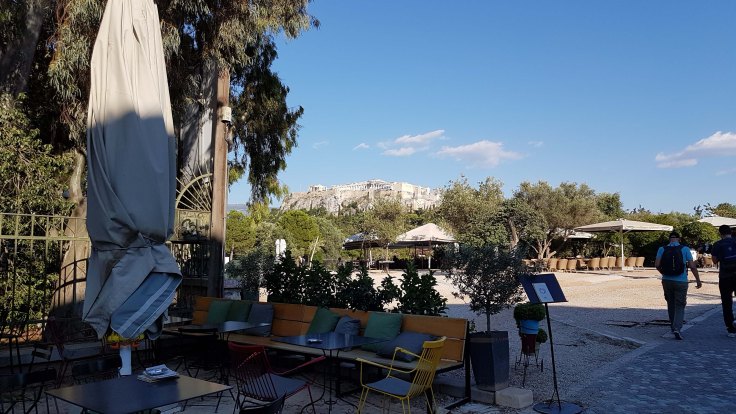 I was heading in the direction of Filopappou Hill, so decided to keep walking and head up there for the sunset. I did so without having mapped out my plan ahead of time, and there are lots of paths to take on the hill so I pretty much just wandered until I found good vantage points. My legs weren’t enamoured with me at this stage. The Church of St. Demetrius Loumbardiaris is an early stop on the walk. 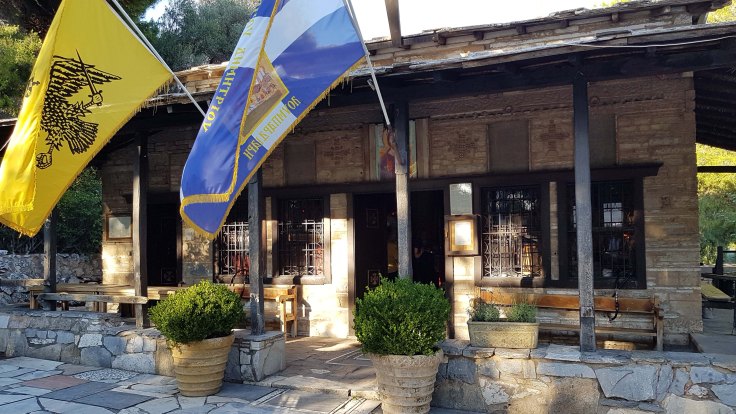 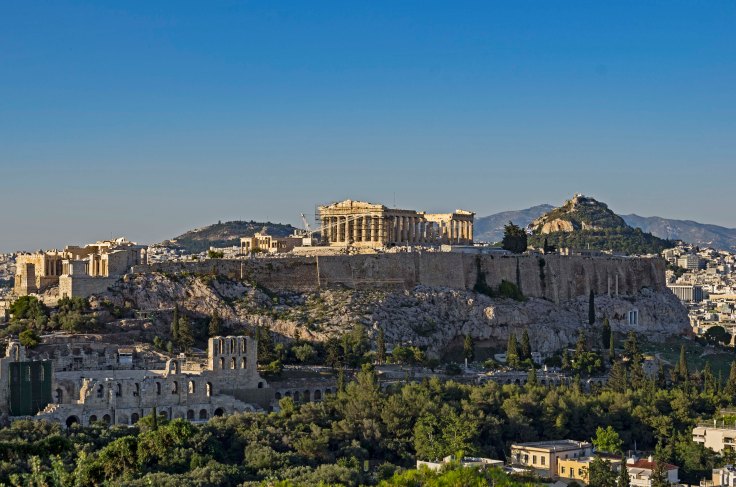 With the sun still high in the sky and my energy levels flagging I decided not to wait for sunset but to head back. People were out walking in large numbers. I chanced upon some live music outside the Acropolis Museum and sat down for a while. Often it is the unscheduled stops that linger most. After that I found food, grilled haloumi and zucchini balls, and ended a very full day. Athens had not disappointed and with all of the amazing views of the Acropolis I had during the day I was very excited about visiting it the next morning. 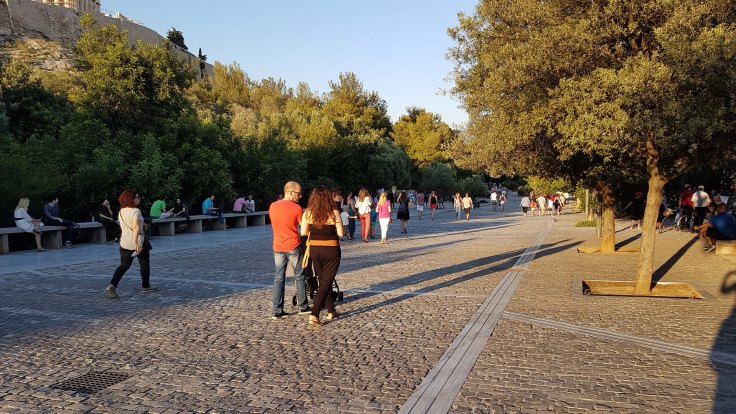 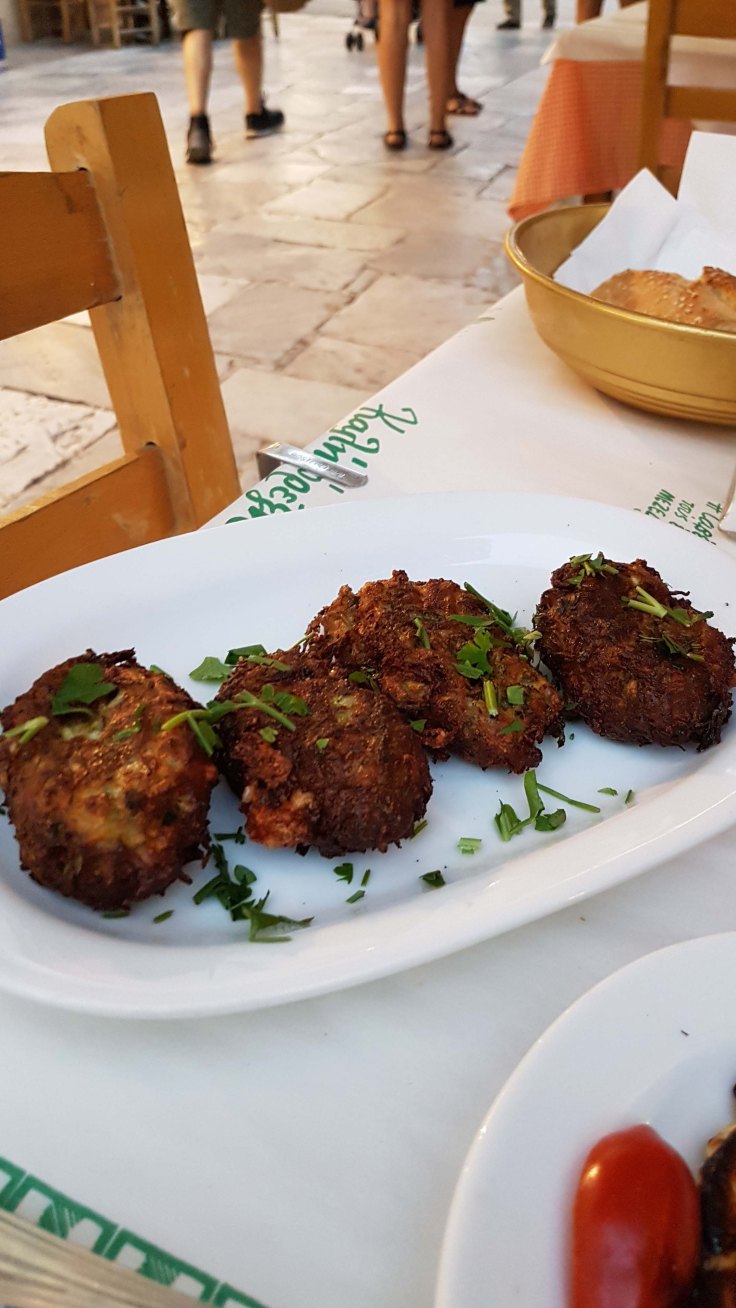