I woke up on my second full day in Munich still undecided about what to do. I had three main options. Stay in Munich and wander, head to Chiemsee which is a lake with a castle on an island in the middle, or visit Zugspitze, Germany’s highest peak. Zugspitze had been my first choice, I visited the Alps in Austria a couple of years ago and absolutely loved it, but it is also weather dependent so I hadn’t locked it in. It is also expensive and a long day requiring several trains and other forms of transport. Chiemsee was suggested to me as an alternative and it looked easier to get to and quite beautiful but having visited Central Europe in 2016 I was pretty much over Castles. And Munich, well I hadn’t seen much of it in 2 visits, spending most of my time out of the city, so it was a viable option with still much to see.

At about 5am (yay jet lag) I got online again, checked the weather and decided to go for Zugspitze. I had read a helpful post on TripAdvisor about how to structure the day. Essentially head straight to Zugspitze then return to Munich via Eibsee and Garmisch-Partenkirchen. It seemed doable in a day.

From Munich hbf you can purchase, from the ticket machines, a Garmisch summer ticket. It covers the trip to and from Garmish-Partenkirchen and all the other forms of transport that you need for the day and this year costs 66 euro.  In Garmisch you collect the included Zugspitze ticket from a small station just outside the main station. Like I said, not a cheap day, but once you are there and see the enormity of the engineering that gets you to the top of the peak, it makes sense and seems worth it. The ticket covers all trains for the day so you don’t have to work to a specific timetable. And trains are plentiful throughout the day.

I was at the station in time to catch the 0632 train to Garmisch which would arrive at around 8 and allow me to beat the crowds to the peak. There are some benefits to jet lag! My good planning couldn’t overcome a cancelled train however, so I had another hours wait for the next train, which I managed to fill with a pastry. 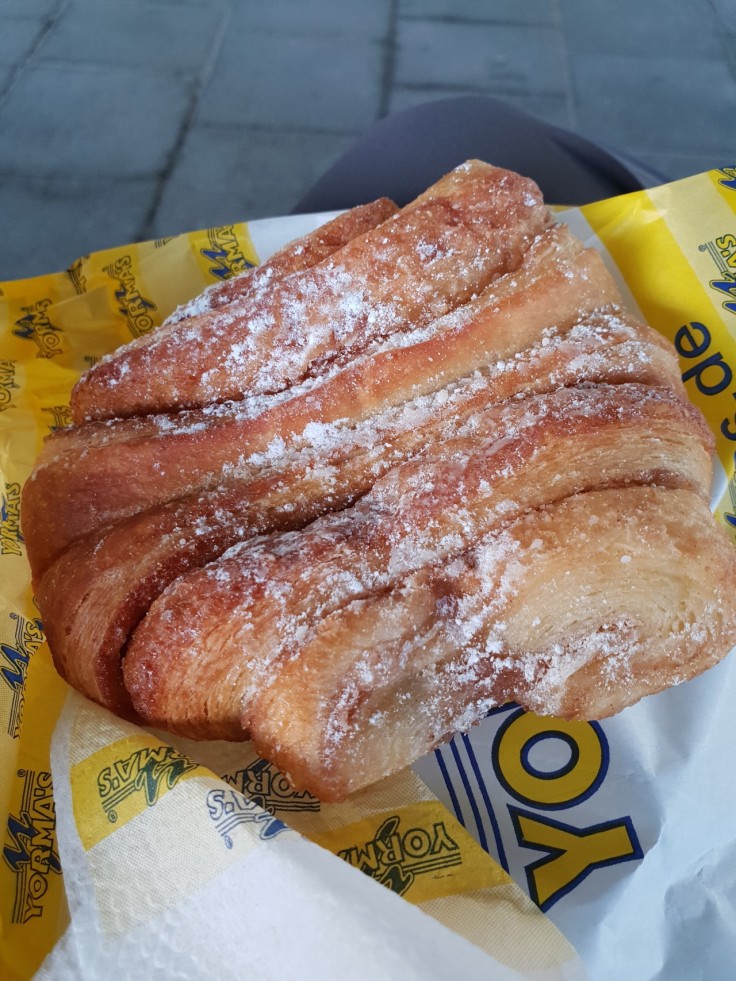 The transition at Garmisch was easy, it was still pretty early by tourist standards, arriving at about 9am and, following the signs, left the station, found the Zugspitze station just outside, walked straight up to the ticket desk and collected my Zugspitze ticket after showing my pass. The train left not too long afterwards. 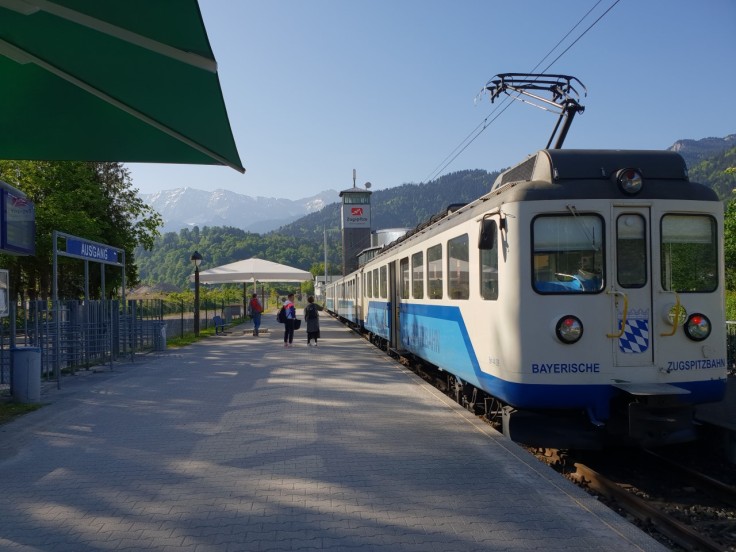 The rest of the trip would be on a cog wheel railway, although I think the first part of it was on a more simple train through the flat part of the trip and we then changed at Grainau to the cog wheel train. Again a simple transition, the second train waiting for us at the adjacent platform and we simply hopped off one and onto the other.

The trip through the flat farmlands in the valley was quite picturesque and I initially wondered what all the huts in the fields were for then remembered that it snows here and they were probably animal shelters!

The cogwheel train took us initially to Eibsee, you can leave the train here and finish the trip via cable car, but since I had planned to take the cable car down, I stayed on the train. The ticket covers either option.

From Eibsee we headed up, a lot of it through tunnels in the mountain. The trip from Garmisch is about 75 minutes total, about 45 minutes of that from Eibsee. It would be a quicker trip up on cable car, but once you factor in getting to the cable car station and waiting for the next car I don’t think it makes a lot of difference and I was keen to experience the trip both ways. 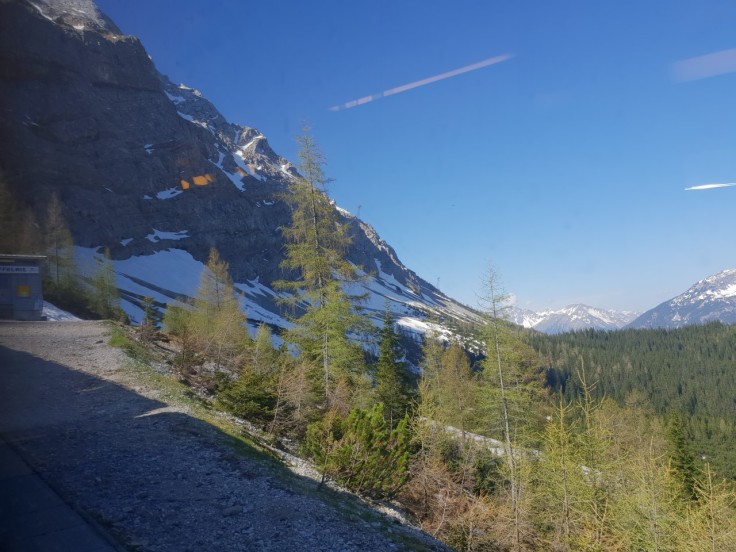 Looking around the train I saw everyone had quite warm looking coats and I felt a little unprepared for being up so high with just a jumper but I was pleasantly surprised when we arrived and found a beautiful sunny day at the glacier and didn’t feel cold at all.

I was pretty unprepared for what to expect atop Zugspitze. I expected a viewing platform and amazing views and not much else, but what I discovered was so much more. My plan to spend half an hour or so up there changed dramatically.

The cable car takes you to the glacier level. Here you are greeted by an expanse of snow, surrounded by views of multiple alps and a large restaurant/biergarten area complete with sun lounges where you can relax and soak up the views while watching kids play in the snow. As someone who has never really visited the snow, I was delighted with my decision to come here.

After a wander and taking a few photos I did what any self respecting tourist to Germany would do and I went and bought a beer and a pretzel and sat reflecting on my awesome decision to visit this spectacular place. I was back on very good terms with my trip planner 🙂

A little bit up the snow from the biergarten area was a small church that many people were walking through the snow to. I pondered for a moment the waterproofness (yes, that is not a word but I don’t care) of my walking shoes and thought what the heck and decided to venture onto the snow myself. I tried to follow the steps of others and managed not to get wet socks at all wandering up to the church and out onto a viewing platform. 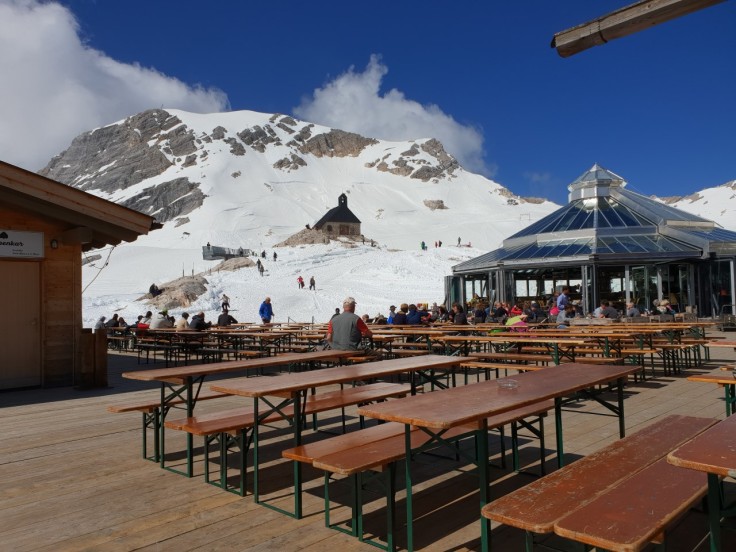 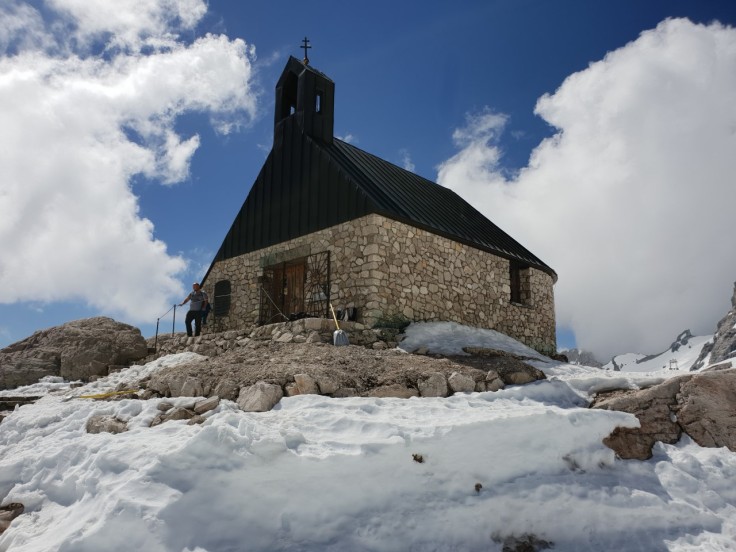 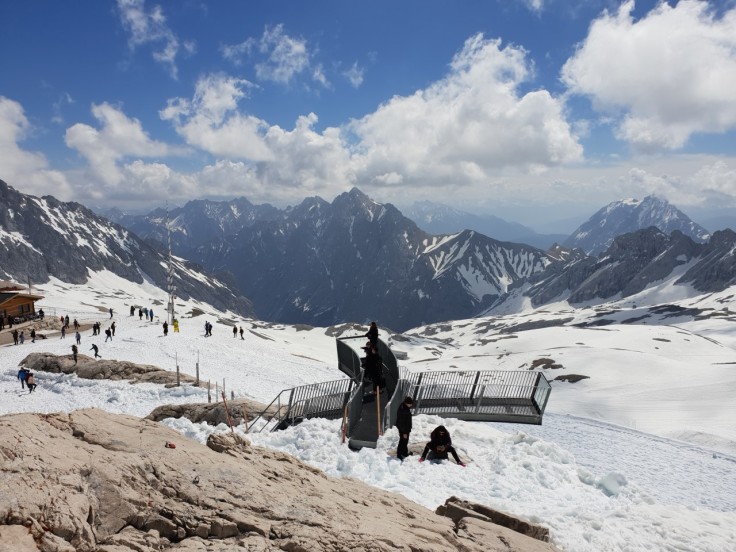 The views warrant mention. Zugspitze allows you to see peaks in several different countries due to its location in the very south of Germany. Apparently on a clear day you can see Austria, Italy and Switzerland as well as Germany. I won’t pretend I could tell which was which but it was a clear day!

After my fun in the snow I headed up to the peak. That’s right, I still wasn’t at the top. To get to the peak from the glacier involves a cable car ride. Again included in the pass. It was only a short wait, the cars hold a lot of people, and I was on my way to the highest point in Germany.

Up at the peak there was a media scrum. What the? I found out later on that some members of the German government were having a meeting up there and the media, of course, were following them. Aside from that the views were, once again, spectacular. Quite a bit of the viewing area was closed off for some sort of maintenance or construction so 360 views weren’t really available and without the relaxed atmosphere of the glacier I spent less time up there. 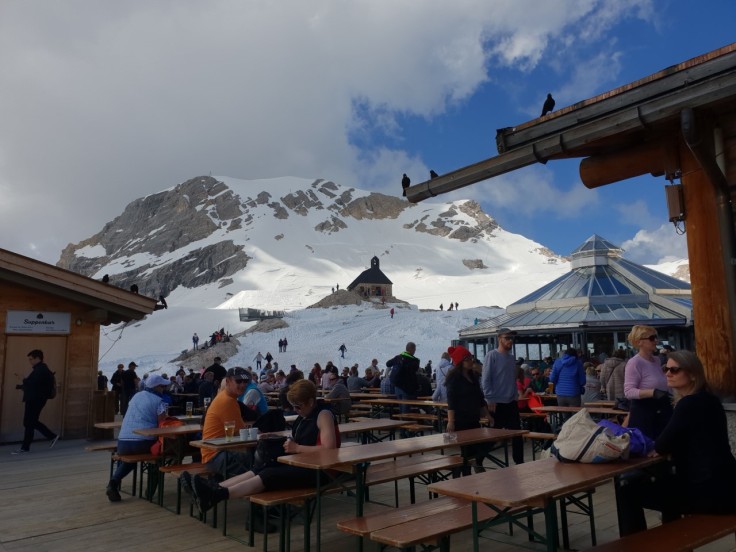 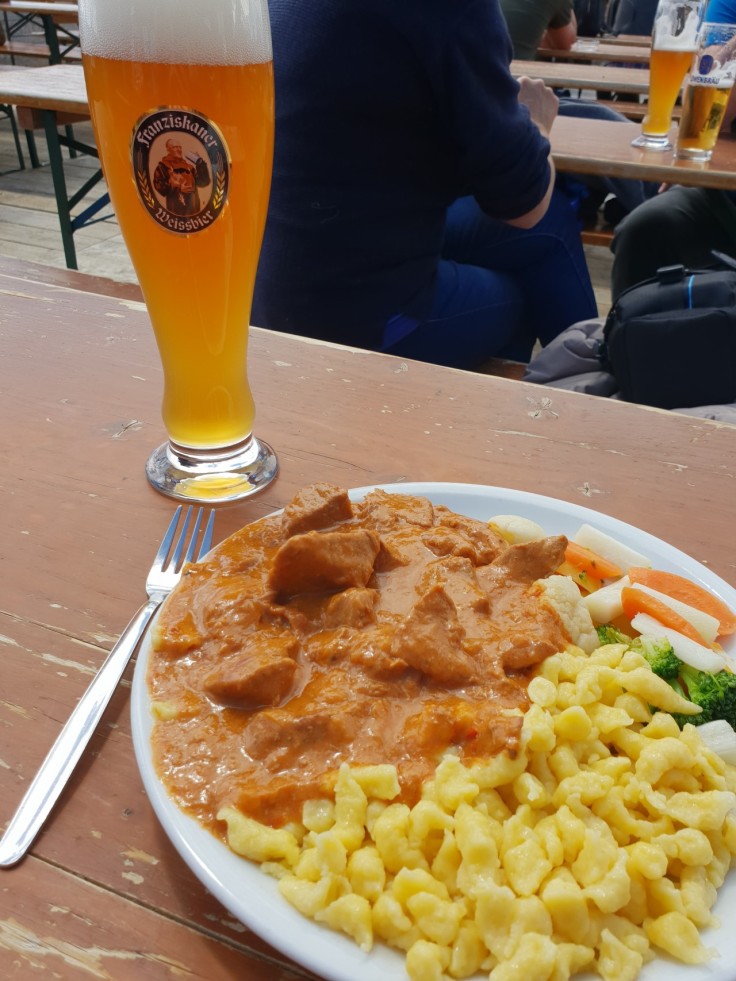 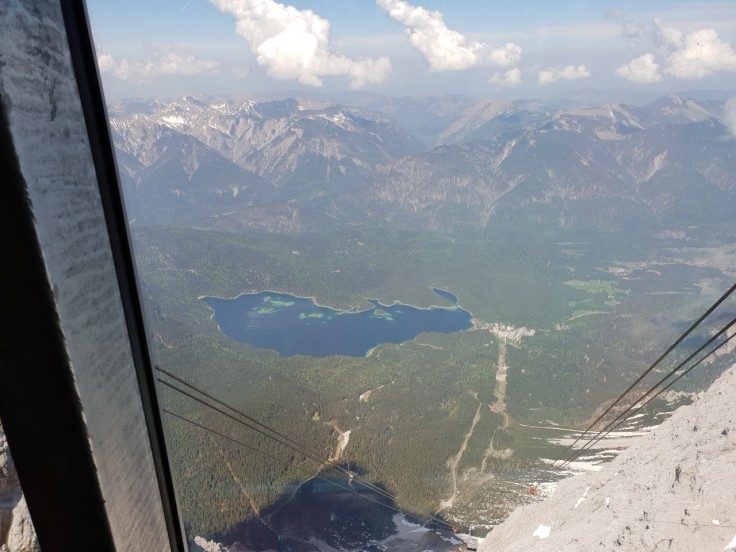 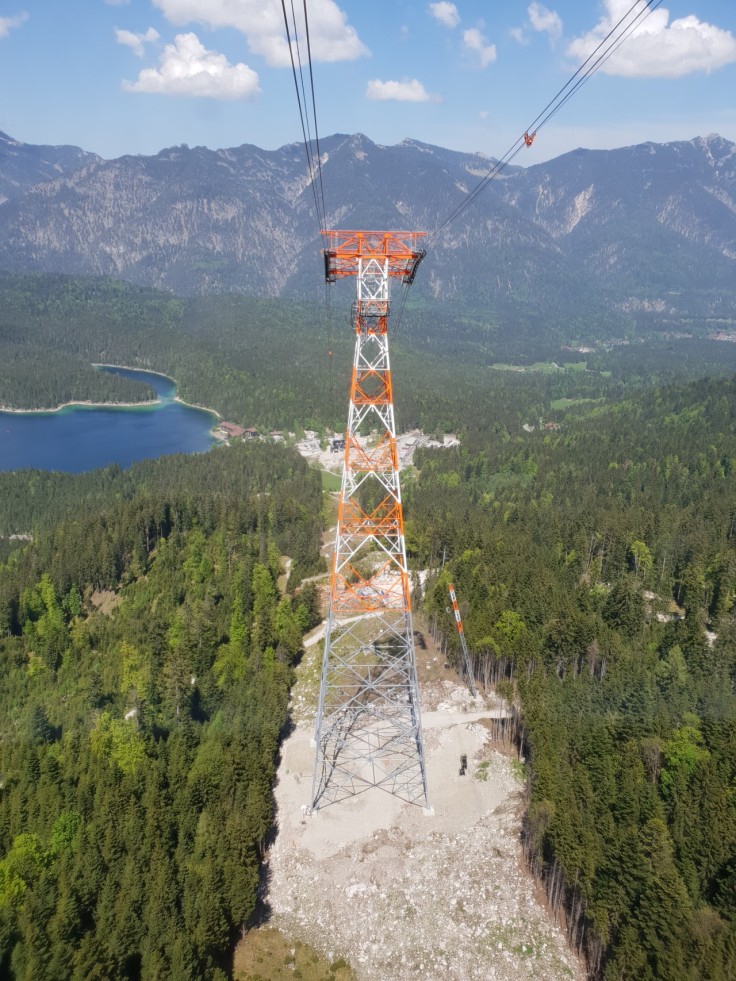 See in German means lake, so any name with see at the end is a lake, thus I was headed down to a lake at the foot of the mountain. My trusty TripAdvisor advice was that the lake was well worth a walk around. The cable car ends at a station located between the lake and the train station. It was a quick walk to the lake.

Just googling now I see that it is about a 7.5km hike around Eibsee. I might not have done it if I’d known that before I left! But it was a beautiful relaxing walk with spectacular views. The water was often tinged yellow and you could smell the sulfur in parts. Several times along the walk I heard the trickle of water and came across small waterfalls running down from the mountains. It was such a relaxing and soul energising place. 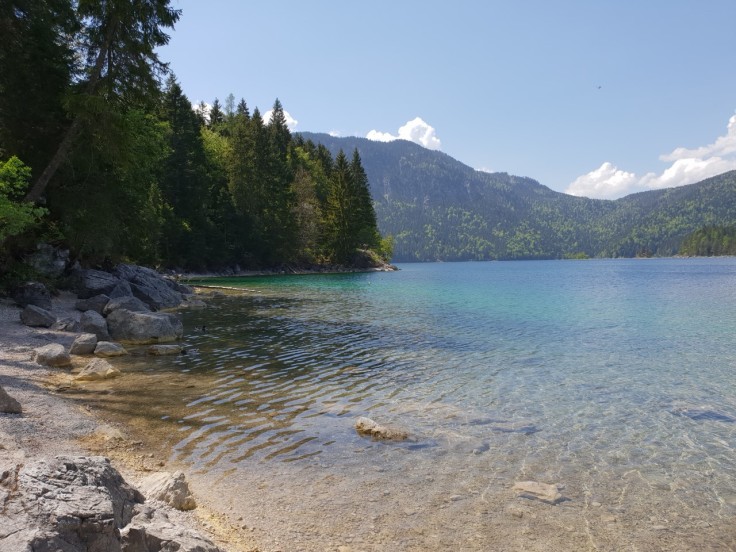 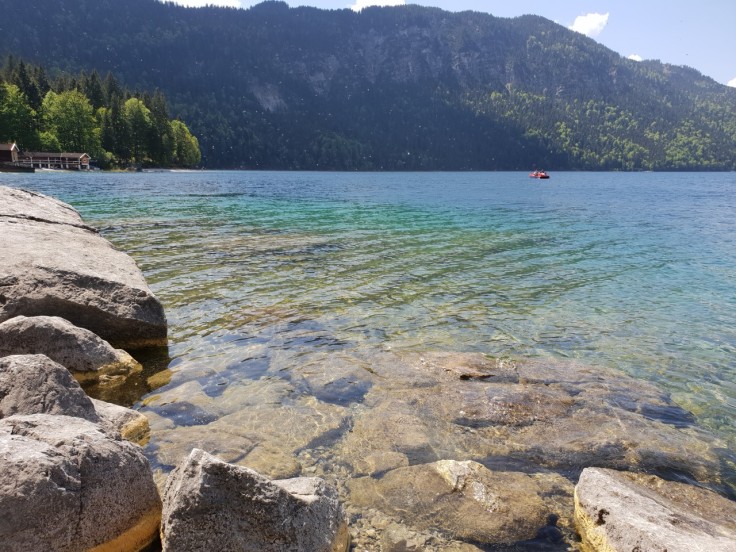 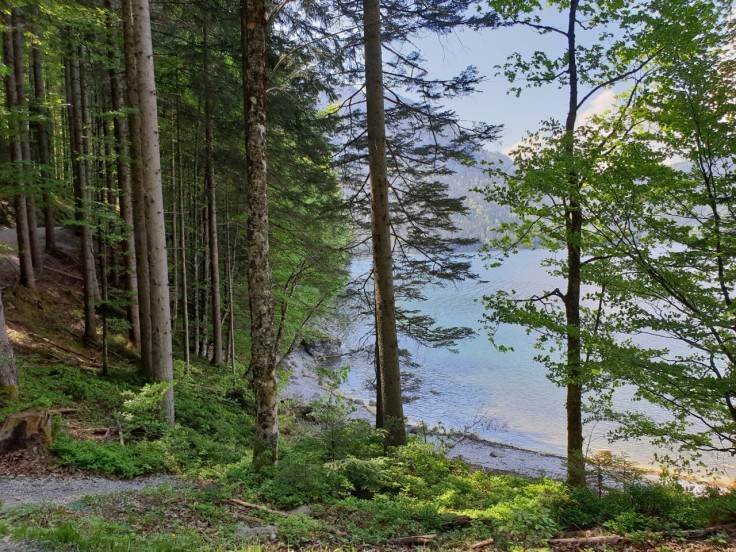 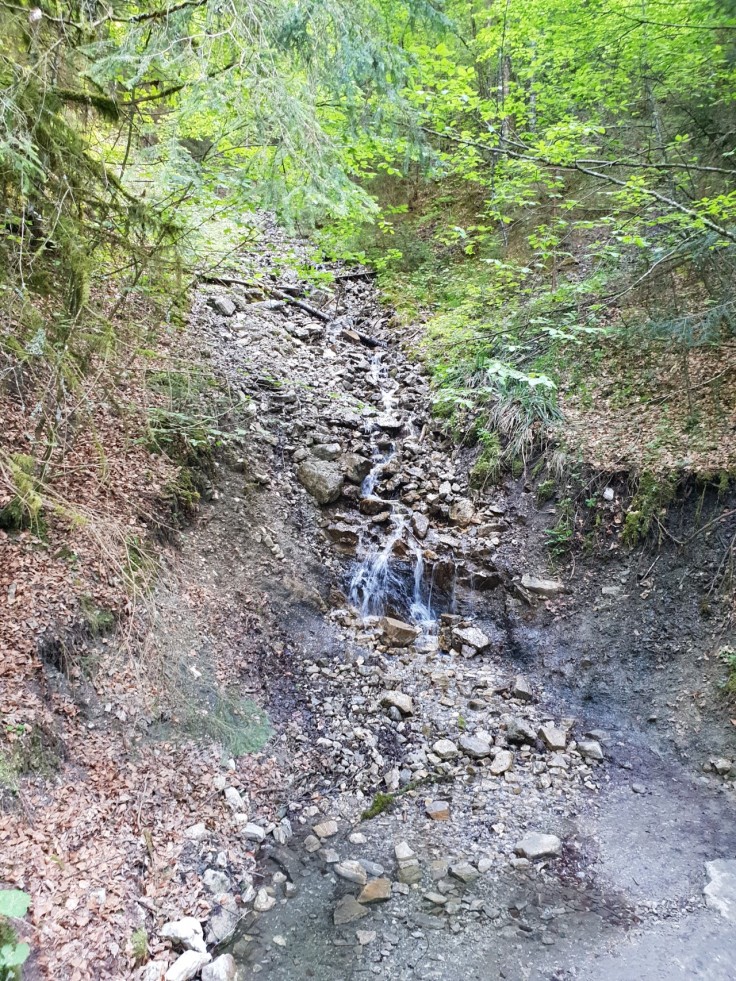 From parts of the lake there were wonderful views back towards Zugspitze and I could see the clouds rolling in up there and was grateful I had gone up early. I expect that the great views I had were no longer there.

Looking back at the time stamps on my photos it looks like I took about an hour and 45 minutes to walk around the lake, getting back to Eibsee station just before 4 pm. I hadn’t thought my day in the area would have been as long as it was but there was just so much to see.

I had entertained the idea of stopping off to visit Garmisch-Partenkirchen on my way back but it was getting late in the day and, funnily enough, I was pretty tired, so after taking the cogwheel train back to Garmisch, I hopped straight onto the next train back to Munich. After snapping a picture of one of the Olympic buildings in Garmisch, host of the winter Olympics in 1936.

Back in Munich I rested a little then wandered down towards Marienplatz to find somewhere to eat. Suddenly it was my last night in Munich and I had yet to eat a meal there! A delicious dinner of pork knuckle later I was ready to call it a night. Another day or two in Munich would have been ideal but more of Europe beckoned. I’ll just have to come back one day. 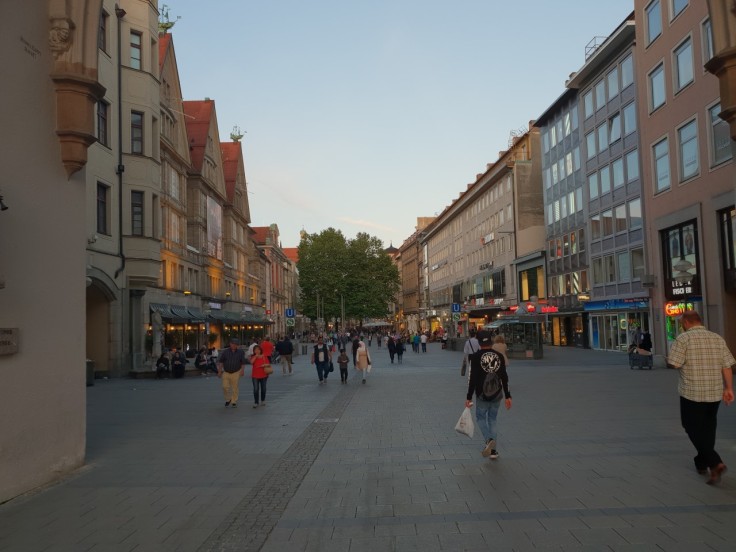 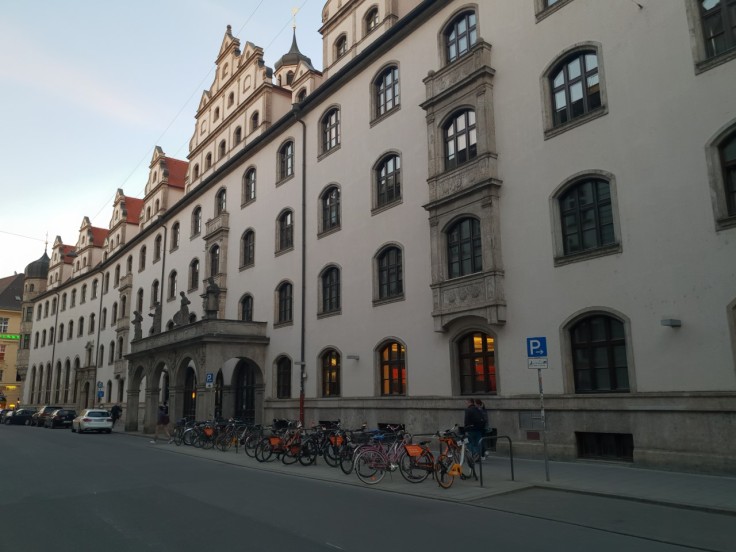 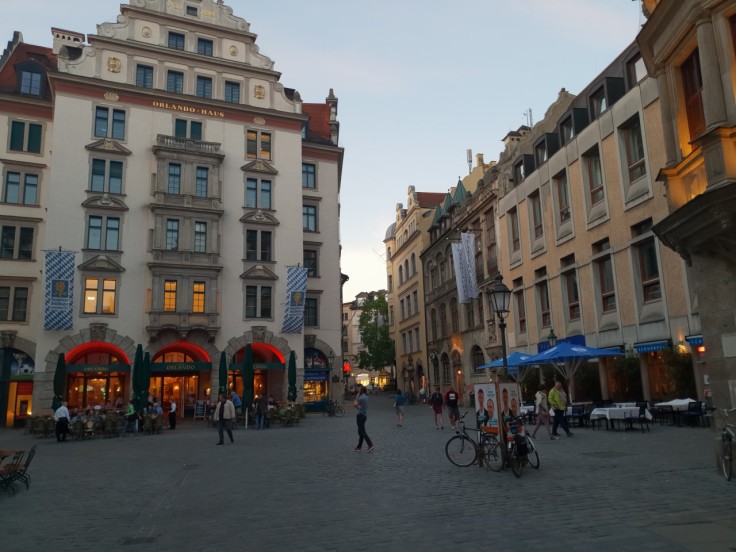 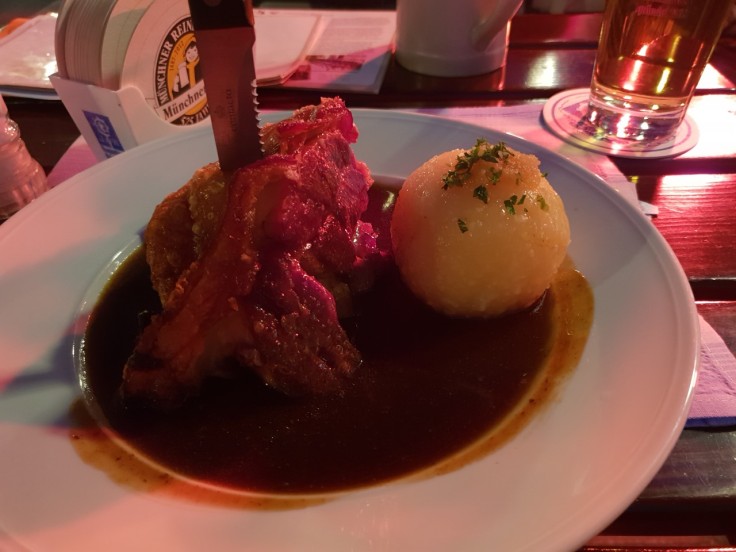