Imagine Santorini was once part of a circular volcanic Island, the crescent shaped Santorini that we know now being one half of that circle, Thirassia is part of the other half. It is a short boat trip away, but in other ways, it is a world away, from Santorini.

There are a few ways to get there, many of the sailing day and half day trips visit, but there is also a small boat that goes across from Amoudi bay three (I think) times a day. Not wanting to do an organised trip, I chose the latter option.

This wasn’t my most well planned out part of the trip. I had done a bit of reading about where to go, but with everything else I was doing this trip, it had gotten a little lost. I pretty much just jumped on the boat, and then followed everyone off it onto a bus, wandered for a couple of hours, had a drink, then returned. There are worse ways to fill an afternoon.

The boat left Amoudi at around 1230. I just hopped on and a man came around soon after selling tickets. 1 euro later I was paid up. And they say everything is expensive on Santorini! The boat contained probably more locals than tourists. There were magnificent views as we pulled away from the dock.

It was a pretty quick trip, any time estimate I give will be wrong, but it certainly doesn’t eat into much of your day. We arrived at a small dock where there was a taverna or two and a small bus waiting. I knew I needed to get on a bus to get up to the villages so I hopped on.

The bus made a couple of stops before arriving at the edge of a village where everyone got off, being the sheep that I am I got off too. The bus driver told us what time he would be back and I made note not to get left here all night!

I really had nothing planned so had a wander through the village, which I now know was Manolas, then walked up a road to a beautiful church I had seen in the distance. The contrast from Santorini was quite striking. There were so few tourists that it was like wandering alone, and so few locals as well. The village had the same striking blue and white Cycladic architecture. 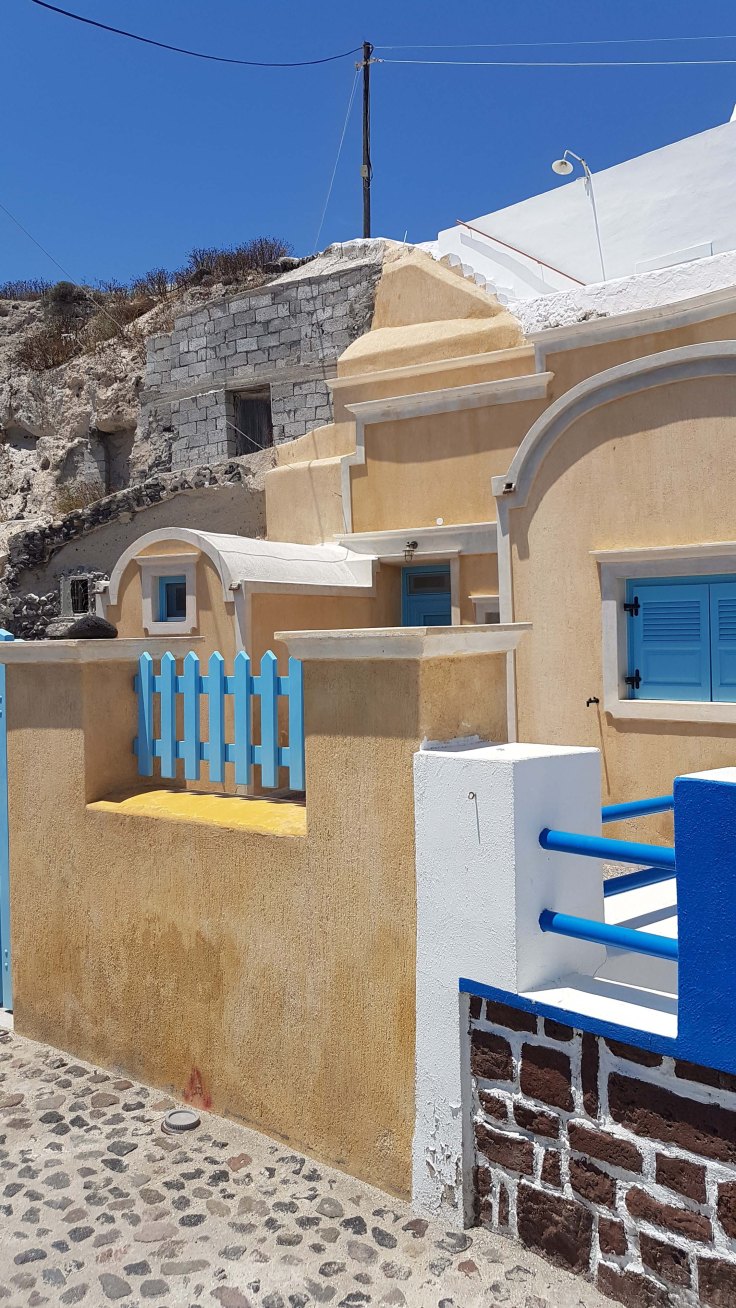 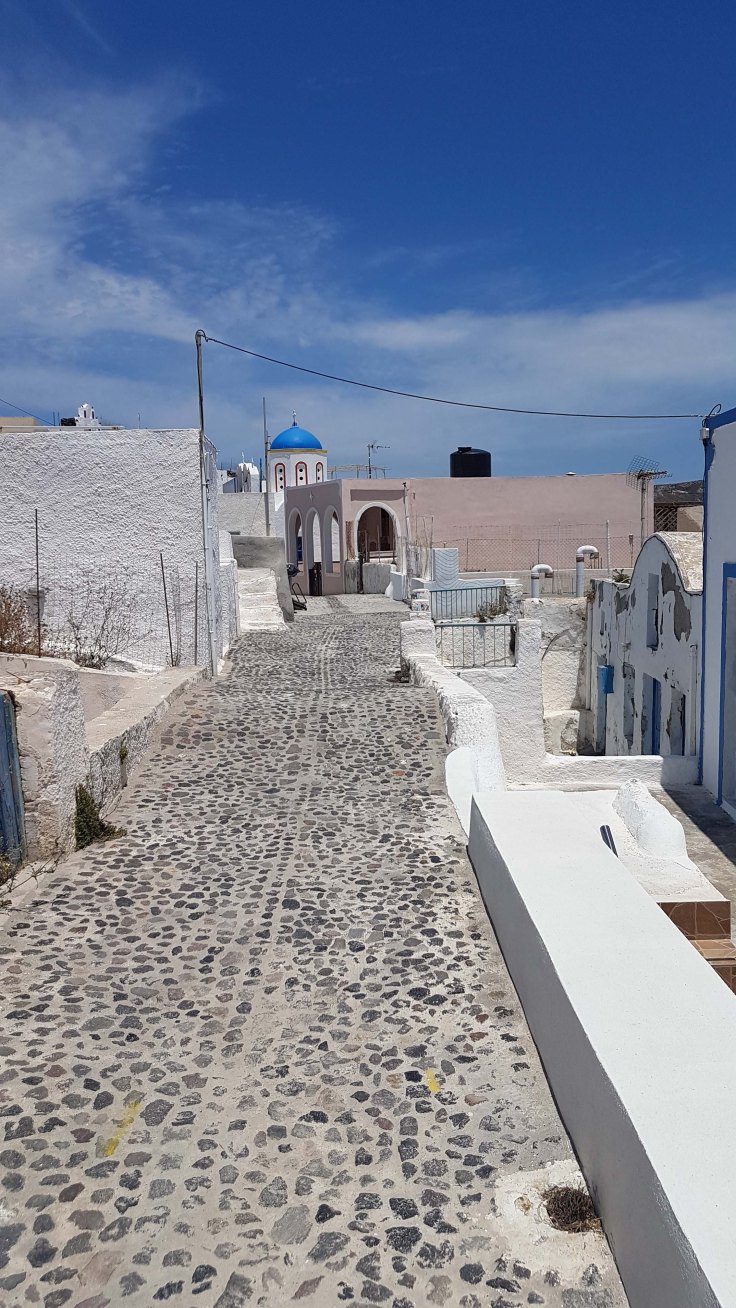 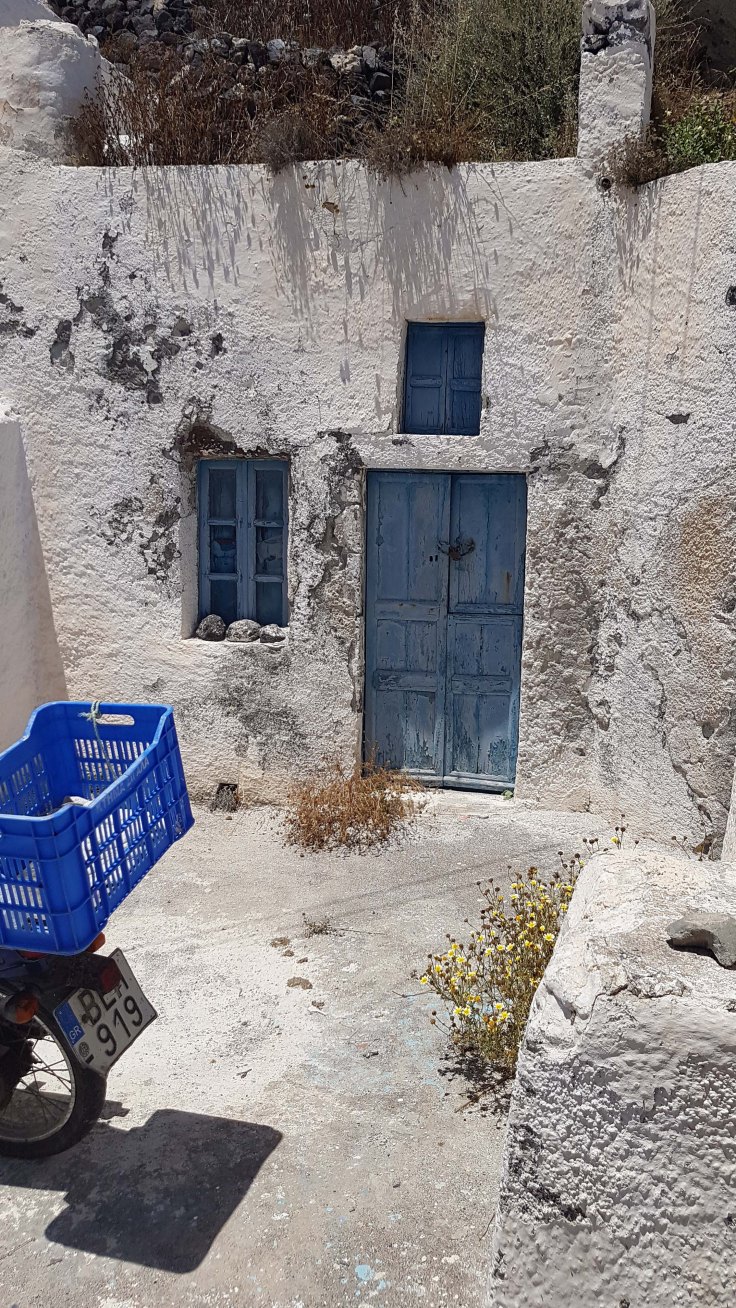 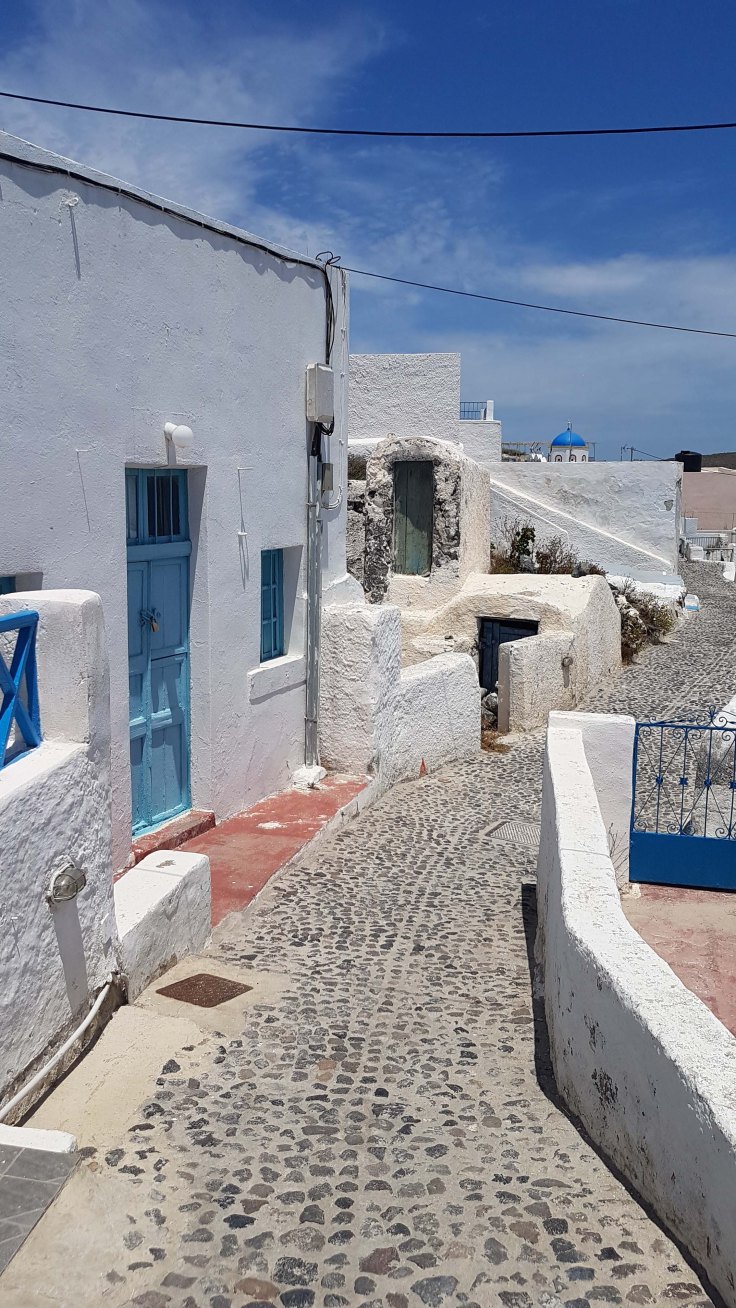 Walking up the hill to the church my legs remembered that they had already done the Fira to Oia hike that day. It was also getting very warm and with the sun very high in the sky shade was nowhere to be found. It was worth the walk though, great views and a lovely church with a small cemetery. I like the way that the grave sites have photos and candles, an ongoing celebration of a life. 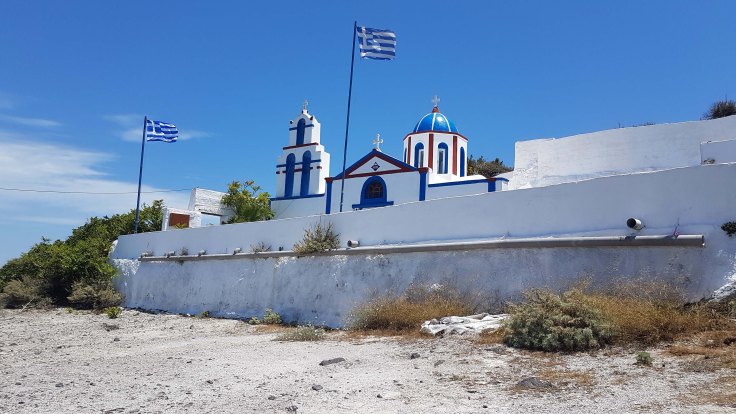 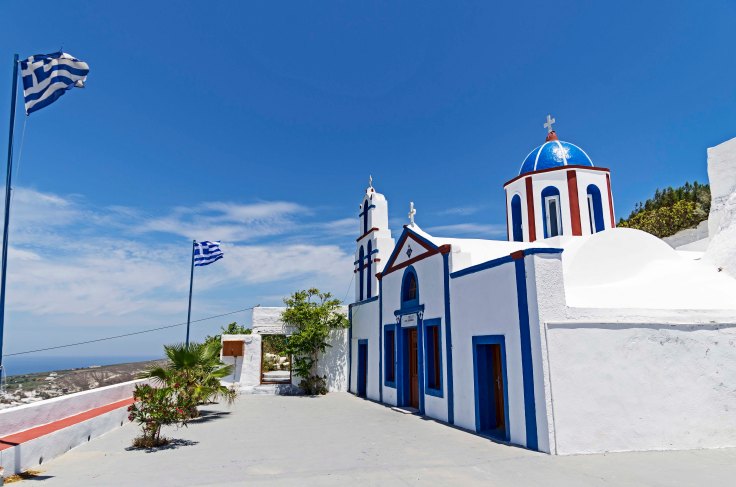 By this stage I was really hot and returned to the village to find something to drink. Choices are limited but there was one small taverna that was obviously switched on to the fact that there was a market for feeding wandering souls and had plenty of signs in the village directing you to its food and free wifi! It had a pretty reasonable view too. 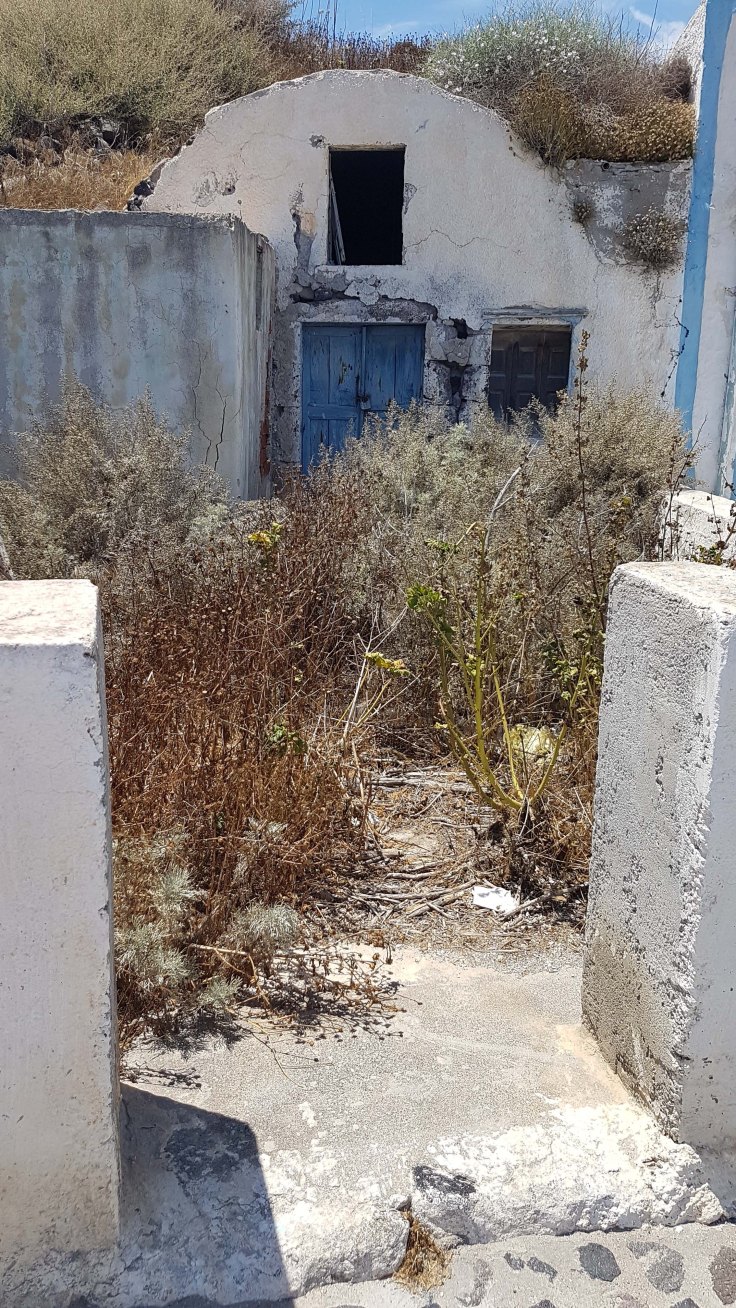 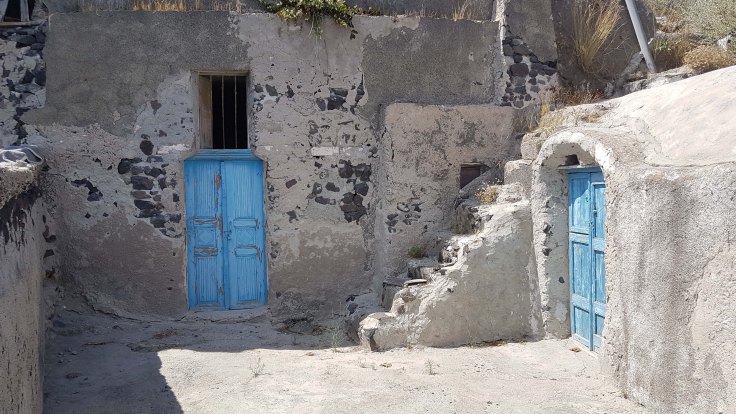 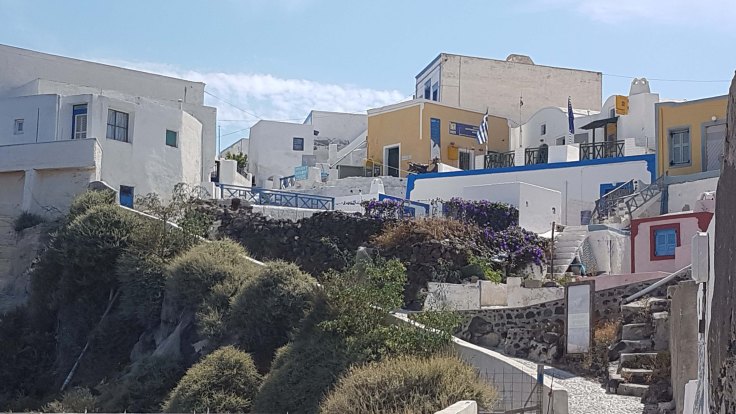 There was a bay down below which looked lovely and I think might have been the other pick up point for the boat back to Amoudi Bay. But I wasn’t sure and wasn’t taking the risk of having to walk all the way back up so I sat, had a drink, took in the view and relaxed for a while until it was time to return to the bus stop.

The one thing I had remembered about Thirassia was that there was a great bakery there. I hadn’t seen it so I asked at the taverna where it was. The waitress told me it was closed already, but a few minutes later came back to me and ushered me into the kitchen where she had a loaf of bread waiting for me. I might have missed seeing the bakery, but I did get to take home some bread.

You could probably get a lot more out of an afternoon on Thirassia than I did with a little more research and a bit more energy. It would be easy to visit more than one village and to get down to the beach. For a peaceful escape from the chaos of Santorini, it is ideal.

The bus returned to the pick up point as promised and returned me to the dock for an equally spectacular boat trip back to Amoudi Bay. 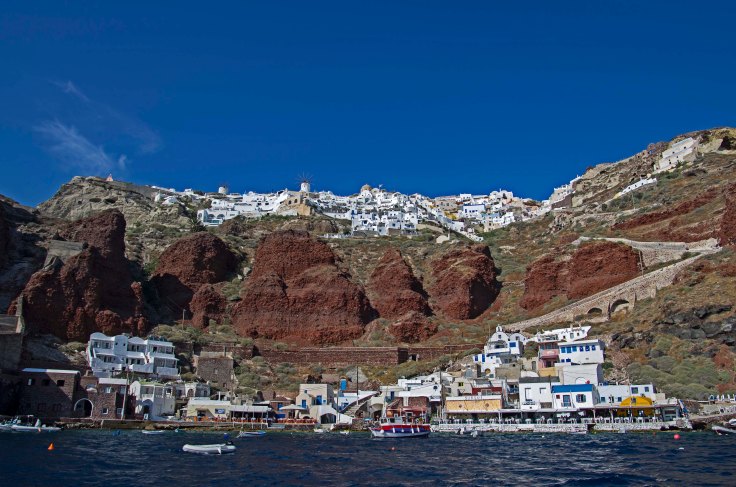 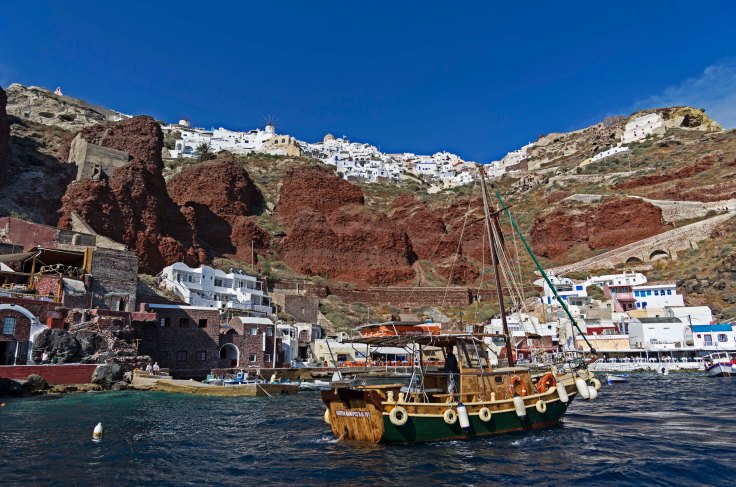 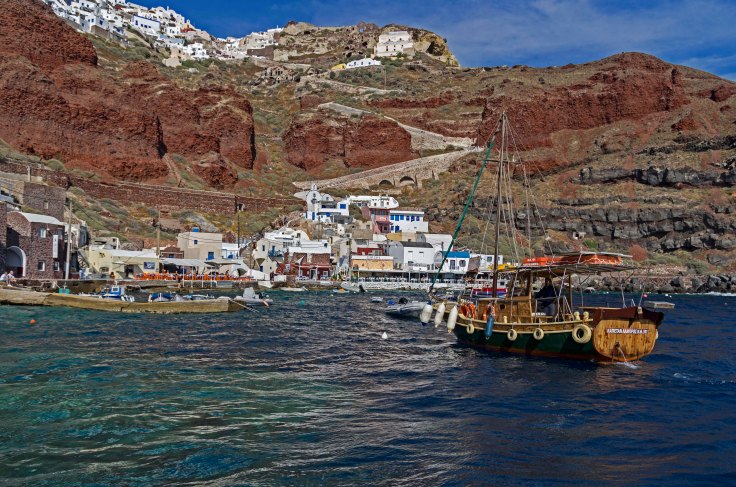 The legs that had  started the day in Fira now had to contend with the donkey track. I chose not to use the donkeys, I don’t believe in using animals in that way. I won’t lie, it was a really hard walk back up on legs that by the end of the day had covered more ground than they did on the Samaria Gorge day. At least there were beautiful things to look at on the way up. 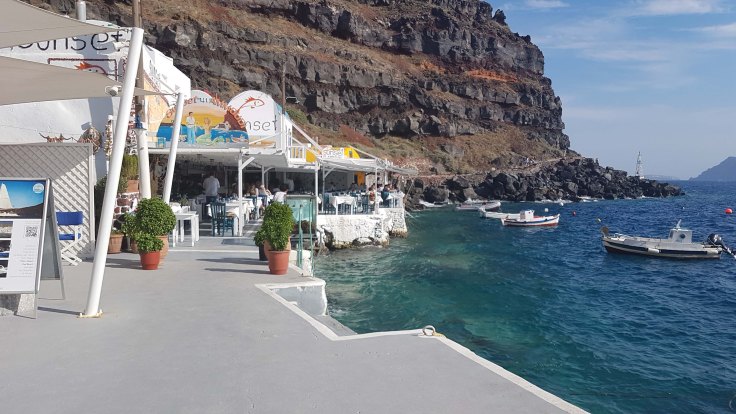 I had planned to spend the evening in Oia to view the sunset before catching a bus back to Fira. But once I was back in Oia I changed my mind. Granted I was exhausted, but also there were people everywhere, and not just people, but tour group people, guides with flags everywhere, talking loudly. With still a couple of hours to fill before sunset and presumably a lot more people arriving, I decided to leave. I made my way to the bus terminal and waited for the bus. When the bus arrived I walked up to it and waited for it to empty before getting on. Never in my life have I seen so many people get off a bus. There must have been hundreds crammed into it. Two nights later when I entertained the idea of returning to Oia for my final sunset, it was the memory of this bus that stopped me.

Once back in Fira, I bought some cheese to add to the olive oil and wine I had brought from Crete and with my fresh bread made a meal on my balcony and people watched. I didn’t even bother with the sunset I was so exhausted. A massive day and some more lessons learned about just how much I enjoy the quieter places.